Major oil-producing nations are leaning towards keeping a lid on production throughout 2019, defying President Donald Trump’s calls to open the taps and cut the cost of crude.

OPEC and a group of allies led by Russia are trying to keep supply and demand in balance and stabilize prices by pumping less oil. Over the weekend, a committee representing the so-called OPEC+ alliance strongly signaled the group will extend the policy, which has helped to boost oil prices by about $20 a barrel this year.

If OPEC+ follows that course when producers meet in June, it would be the second time in six months the group ignored Trump, who lobbied against the current production cuts last fall. So long as the production caps remain in place, oil prices are likely to remain anchored near six-month highs around $63 a barrel. 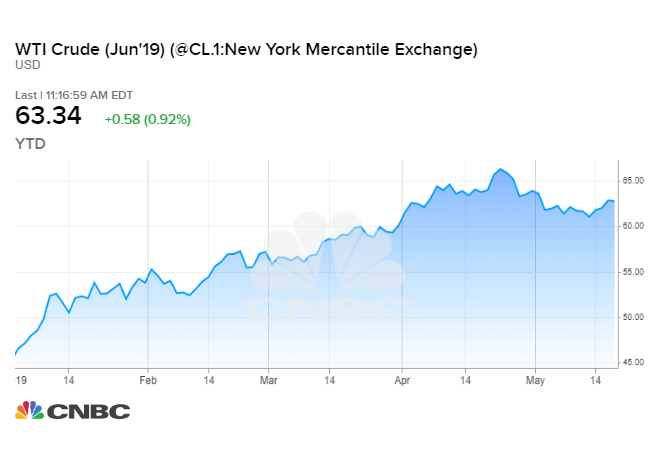 That would keep a thorn in Trump’s side. The economy-focused president wants to lower prices at the pump, but his foreign policy is putting upward pressure on oil futures, which in turn increases gasoline costs.

Washington has restricted global oil supplies by slapping sanctions on OPEC members Iran and Venezuela. Trump wants his allies in Saudi Arabia and the United Arab Emirates, two of OPEC’s biggest producers, to offset those losses by pumping more oil.

But the Saudis and Emiraties have not committed to hiking output. On Sunday, Saudi Arabia’s influential oil minister, Khalid al-Falih, warned that global crude stockpiles are rising, threatening to swamp the world in oil and cause prices to collapse.

“Overall, the market is in a delicate situation,” Falih told reporters at the committee meeting in Jeddah, Saudi Arabia.

“On the one hand, there is a lot of concern — and we acknowledge it — about disruptions and sanctions and supply interruptions,” he said. “But on the other hand, we see inventories rising. We see plentiful supply around the world … which means we think, all in all, we should be in a comfortable situation in the weeks and months to come.”

OPEC+ nations are currently aiming to keep a combined 1.2 million barrels per day off the market. However, supply from the group has actually fallen much further, according to the group’s Joint Ministerial Monitoring Committee. The panel was established to monitor compliance with production quotas under the output deal, first agreed to in December 2016 and renewed last fall.

The JMMC met in Jeddah on Sunday, but did not issue a recommendation to the larger group, which meets at OPEC’s headquarters in Vienna, Austria next month. The JMMC largely echoed Falih’s comments, saying in a statement its members need more information from their oil market analysts before deciding whether to keep the output curbs in place.

On Monday, closely-followed UBS commodity analyst Giovanni Staunovo reported that OPEC+ is considering delaying its June meeting until July, perhaps so producers have another month of data to consider.

Much of the uncertainty the JMMC referenced is emanating from Washington, which has clouded the outlook for global economic growth and oil demand by waging a trade war against China. At the same time, the Trump administration has heightened tensions in the Middle East by ratcheting up pressure on Iran and deploying military resources to the region.

The oil market is now very unstable, and it’s more difficult to set long-term policy, Russian Energy Minister Alexandar Novak told CNBC on Sunday. Novak pointed to two developments this month: an escalation in the U.S.-China trade war and Trump’s decision to tighten sanctions against Iran, which is meant to cut the Islamic Republic’s oil exports to zero and has set off a series of dangerous escalations in the region.

However, OPEC+ could deliver some relief to oil buyers, and the group is considering its options, Novak told CNBC.

In April, Saudi Arabia pumped just 9.7 million barrels per day, even though it is allowed to produce 10.3 million bpd under the OPEC+ deal. That means the kingdom could add roughly 570,000 bpd to the market even if the alliance rolls over the production curbs.

The other major reason OPEC+ has cut production more than it intended is because output is plunging in Iran and Venezuela.

OPEC+ is also considering slightly easing the total output cuts, reducing them from 1.2 million bpd to about 900,000 bpd, sources told Reuters. That could add another 300,000 bpd to the market.

Warren Buffett and the Insurance Business: A 52-Year Love Story

J.P Morgan’s rivals won’t be able to catch up to soaring...