Traders and financial professionals work at the opening bell on the floor of the New York Stock Exchange (NYSE), May 6, 2019 in New York City.

Stock picking is making a comeback as active investors are on pace for one of their best years in a decade.

So far this year, 48% of large-cap active funds have beaten their benchmarks, according to Bank of America Merrill Lynch. That’s the second-best rate since the Financial Crisis. Two years ago, the group had a similar break-out performance suggesting a “better backdrop for managers.”

A key reason for the better performance is that stocks are now less correlated with each other, compared to sectors overall. That suggests that picking stocks now matters more than just picking a winning sector, Subramanian said. That’s even more exacerbated by the trade war, which is helping and hurting different companies within sectors. For example, tech companies with more exposure to foreign demand have been underperforming. 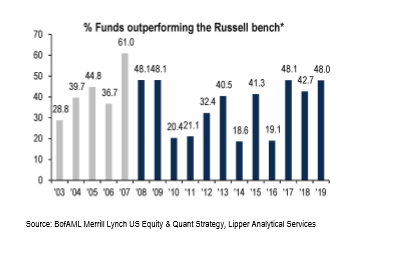 Growth funds have fared best this year, with 60% outperforming the Russell. Slightly less than half value funds have outperformed their Russell benchmark, while core funds are the biggest laggards.

Still, for those who are picking the right stocks — there appears to be a scarcity of opportunity, or so-called “alpha,” so it’s unclear whether their hot streak can last.

“The spread in performance between the best performing and worst-performing stocks (long-short alpha) has remained below average for the last several years, suggesting narrower spreads even if a manager had perfect foresight,” she said.

Despite this recent boost in performance, there’s been a massive overall shift to index funds and ETFs. The amount of money invested in passive funds has more than doubled since 2009, according to Bank of America. And the price to invest is falling alongside them as asset managers like Fidelity and Charles Schwab race to undercut each-other with lower fees. Passive asset management giant Vanguard now owns more than 5% of almost all S&P 500 stocks, Bank of America said.

“Despite better trends for active funds, we see risk that this secular shift from active to passive has more room to go, even if the pace of the rotation slows,” Subramanian said. 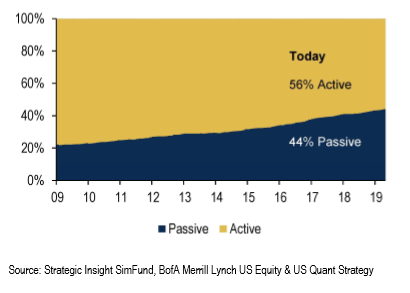 Crypto Correction Could be Imminent as Bitcoin Rally Cools

With 10 Million Acres in Patagonia, a National Park System Is...

Another day, another Capitol Hill grilling for CFPB’s Kraninger