Ethan Brown, founder and CEO of Beyond Meat, center, rings the opening bell during the company’s IPO at the Nasdaq in New York on May 2, 2019.

The IPO market keeps getting hotter, but how much more juice is left? CrowdStrike Holdings, a cybersecurity company that a week ago was discussing going public at $19 to $23 a share, priced at $34 and opened at $63.50.

Pet e-tailer Chewy upsized its IPO ahead of its Friday debut.

They are not alone. In February, IPO watchers were fearful an avalanche of IPOs would cause a crash in the market, but the big tech unicorns have been winners so far.

The Renaissance Capital IPO ETF, a basket of the 60 or so most recent large IPOs, is up 34% this year, more than twice the performance of the S&P 500. 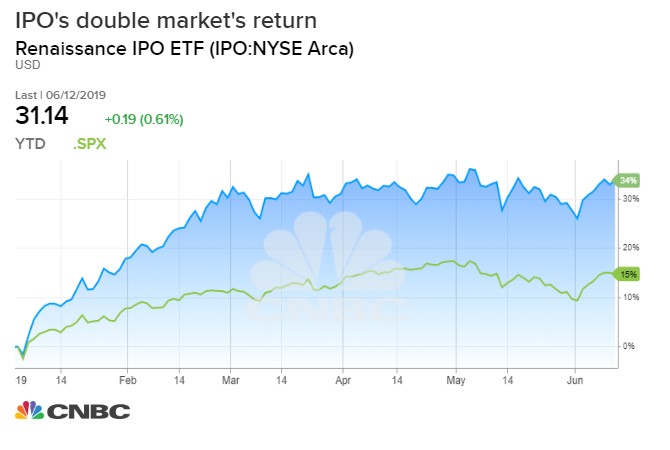 What’s going on? “If you’ve got extremely fast growth and a market opportunity, investors are comfortable knowing that profits will come later,” said Matt Kennedy, who analyzes IPOs for Renaissance Capital.

Surprisingly, prices are holding up well. Of 64 IPOs that have priced this year, 25 (40%) have priced at the high end of the range or above.

Kennedy noted that four of these companies — Beyond Meat, Zoom, CrowdStrike and PagerDuty — exhibited similar characteristics: fast growth and a large market opportunity.

Beyond Meat is disrupting the food industry. Zoom is profitable with a large market opportunity with video conferencing. Crowdstrike’s endpoint security business is also growing fast. Pinterest has a somewhat unique niche — not quite social media, more like a discovery play, and priced below its last round of funding.

The lone unicorn disappointments this year: Uber Technologies and Lyft, down 6% and 19% respectively. What do they lack the others have?

Kennedy noted that investors are not impressed with the economics of ride hailing — specifically, the deep losses. In addition, both suffered from valuation issues (neither had a successful publicly traded peer), and both priced well above their last round of funding.

Still, there’s nothing like an up market to boost IPOs. The S&P 500 is up 15% this year. That leaves these names vulnerable should there be a larger market downturn.

And one of the most appealing characteristics of the winners — rapid growth — could quickly turn against them.

“The risk is that they are priced to perfection, so if there is any slowing of growth expectations they will get hit hard,” Kennedy said.

5 times when a no annual fee card is better

3 Things That Affect When You Should Apply for Social Security