Jerome Powell, chairman of the U.S. Federal Reserve, right, walks with Mario Draghi, president of the European Central Bank (ECB), during the spring meetings of the International Monetary Fund (IMF) and World Bank in Washington, D.C., U.S., on Friday, April 20, 2018.

With global growth slowing, the world’s central banks are in a race to cut interest rates to boost their economies, and the European Central Bank is expected Thursday to weigh lowering its already-negative interest rate.

The ECB could act, but strategists and economists say it’s much more likely the central bank will set the stage for an interest rate cut and other easing at its September meeting. The ECB meets ahead of the Fed’s much-anticipated vote next week, when it is expected to cut rates and begin a new cycle of interest rate reductions.

“I think [the ECB] is going to lay out a framework for doing more in the way of rate cuts and quantitative easing, in keeping with what [ECB President Mario] Draghi said at the Sintra conference,” said Rick Rieder, BlackRock’s global CIO of fixed income. “They are going to do whatever it takes to try to stem some of this disappointment around inflation and growth. He raised the bar quite a bit. This is a very big meeting … Quite frankly, I think what the ECB is doing and what the other central banks are doing in cutting rates in some way forces the Fed’s hand.”

Turkey’s central bank is also expected to meet Thursday to cut rates, and the list of central banks now easing or getting ready to ease is long. It includes emerging markets like Vietnam and Brazil, as well as Australia, Russia, South Africa, South Korea, Chile and, Indonesia, among others.

“I think the phrase is ‘when the Fed sneezes, the world catches a cure,'” said Ethan Harris, head of global economics at Bank of America Merrill Lynch

The flurry of central banks cutting rates, even before the Federal Reserve, is somewhat unusual, Harris said.

“You have this slow but steady diet of cuts all over the place. For a lot of the smaller countries, it’s much easier for them to cut when the Fed cuts because they don’t have to worry about an attack on their currency,” he said. “These are countries that have weakening economies that were hurting while the Fed was tightening and now they’re cutting ahead of the Fed. The Fed is giving them an opening.”

Fed’s actions ‘off the charts unprecedented’

The Fed kicked off a round of rate cuts when it sent a strong signal about its own policy shift, telling markets after its June meeting that it is concerned about the impact of trade wars and the slower global economy. The Fed statement after that meeting echoed earlier comments from Chairman Jerome Powell that the bank would take appropriate action to sustain the U.S. expansion.

“There’s a case for easing in Europe, but it’s not pressing hard on them. What the Fed is doing now is off the charts unprecedented where they move without any hard evidence in the data, and the ECB is not in that frame of mind at all. They’re going to lag the Fed,” Harris said. He does expect the ECB to cut rates in September and ultimately take its negative 0.4% discount rate to negative 0.6%.

The ECB could also provide some details on more quantitative easing, or asset purchases. It now buys sovereign debt and some corporate bonds. It could discuss buying more corporates and even stocks.

“That kind of thing is much further out. Their tool kit for the next few year includes many things. Buying stocks would be one. They could explicitly change the way they guide on interest rates,” Harris said.

When the Fed cuts that should help weaken the dollar, which is viewed by the International Monetary Fund as being overvalued relative to its trading partners. Market speculation has circulated that the U.S. could intervene to weaken the dollar because of President Donald Trump’s repeated comments about other central banks being currency manipulators, but strategists doubt that the Trump administration would do such a thing.

Fighting against the trade war

“A lot of these countries’ economies that are cutting have external imbalances, where investors get spooked if they’re the only ones cutting interest rates. They worry if you lose your foreign capital flows, but if the Fed is also easing they don’t worry about that,” said Harris. “These are countries that have a very hard time using their monetary policy ammunition. Every time they ease, the currency comes under pressure and it raises questions about the resiliency of the central bank.”

Rate cuts by the Fed should help emerging markets but that is not the Fed’s stated intention, Harris said.

“The Fed lives in a global economy where the dollar is important,” said Rieder. “The Fed has to be influenced by global growth and the U.S. dollar. When you raise rates and force the dollar higher, you increase this reverberation to the global economy.”

Diane Swonk, chief economist at Grant Thornton, said the trade wars seem to have united central banks but differently than in the past.

“It’s reminiscent of the financial crisis when all central banks put their oars in the water to coordinate policy. This isn’t a coordination of policy. it’s a correlation a policy,” Swonk said. 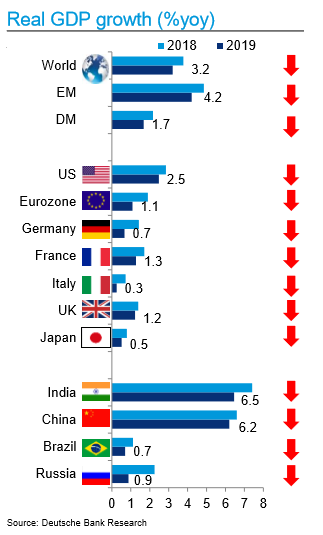 The interest rate that drives mortgages and other loans is snapping...

Citigroup now sees slight gains for stocks, without much help from...