Struggling retailers J.C. Penney (NYSE: JCP) and Macy’s (NYSE: M) certainly deserve credit for thinking outside the box. Last week, Macy’s announced it would begin selling thredUP merchandise at 40 of its more than 600 locations. The very next day, J.C. Penney revealed it had forged the same relationship with thredUP , allocating between 500 and 1000 square feet of selling space to thredUP-supplied inventory at 30 of its 800-plus locations.

However, their new relationships with the secondhand clothing seller may be a step in the wrong direction. 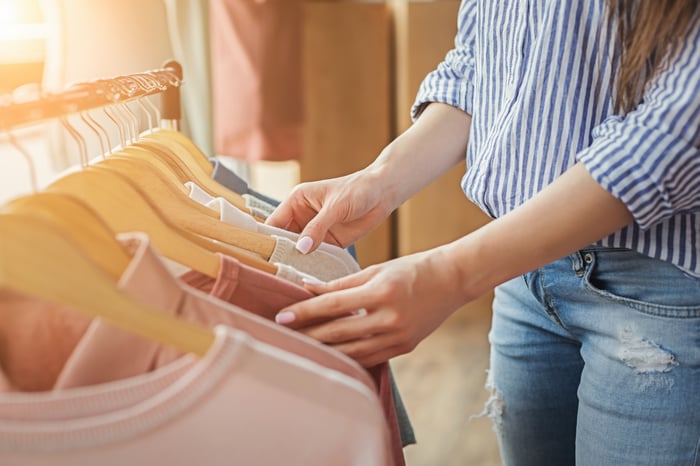 thredUP operates an online store, selling apparel and accessories on a consignment basis or outright buying its inventory from consumers. The company resells an array of brands and clothing, but is best known for offering high-end brands of used apparel at very low prices.

A relationship with thredUP puts both retailers into a fast-growing industry, largely inspired as a means of reducing the adverse ecological impact of the apparel business. The National Association of Resale and Thrift Shops suggests the U.S. clothing resale industry generates annual revenue of about $16 billion. Some industry observers, however, believe the business could swell to $64 billion per year in the U.S. alone by 2028.

It’s growth that both traditionally run department stores could use. Last quarter, J.C. Penney’s total revenue fell 7.4%, or 9% on a same-store sales basis . Macy’s fared better, though not dramatically so. Earnings came up well short of expectations during its most recent quarter, while same-store sales only improved by 0.3%. In both cases, the numbers continued a bigger-picture streak of weakness.

But, Macy’s and J.C. Penney could end up regretting the thredUP experiment.

Just a few years ago, when malls and the department stores that anchored them were in their prime, the premise of selling used goods would have been unthinkable. Retailers only sold new merchandise, and that’s all consumers wanted from them.

Things have clearly changed. Re-using rather than discarding is en vogue.

That doesn’t mean every retailer should embrace the business model, however. For many, including Macy’s and J.C. Penney, adding hundreds of garments from brands not normally offered by other chains sets the stage for inventory management headaches. It may also, in the end, cannibalize sales of regularly priced merchandise rather than add to the retailers’ top lines.

Department stores were and are designed to sell dozens, if not hundreds, of the same item over and over again. In many cases, retailers also monitor specific inventory details like size and color, allowing a store replenish its best-sellers as needed, as well as serve as a warehouse of sorts for online shoppers. Large selections of inventory also allow for effective presentations of merchandise.

The thredUP shops in question won’t operate in the same vein, however. The secondhand merchandise sent to its brick and mortar partners will be curated off-site, and will largely consist of ‘one-off’ items. Even if tagged with a unique stock keeping unit (SKU), or barcode, in-store workers still won’t know exactly what’s in inventory, or what’s coming.

Should a tag fall off a good, it may not even be clear if a garment or accessory is part of a store’s thredUP inventory. That makes such goods easier to shoplift.

There’s also little purpose in dressing a mannequin with thredUP’s clothing, as there may be no other items like it to sell. That can make it more difficult to draw attention to merchandise patrons weren’t explicitly looking for.

As for the presence of thredUP merchandise adding to top and bottom lines, that remains to be seen.

It’s possible the model could prove modestly successful. One-fourth of department store customers acknowledge that they also purchase used apparel, according to thredUP, while rival online seller of luxury goods RealReal (NASDAQ: REAL) reports that more than 90% of its customers also shop at familiar department stores like Nordstrom  and Neiman Marcus. The overlap of the two target markets is still expanding, too.

Still, it’s naïve to believe that either Macy’s or Penney’s will be able to leverage in-store thredUP shops to actually draw significantly more traffic to its stores, and then induce them to spend meaningfully more money than they may be prepared to spend on a shopping trip. Online deal-seekers that wouldn’t normally step foot in a department store at all are still apt to remain deal-seekers even if they should visit a brick-and-mortar retailer.

Secondhand clothing buyers have learned to expect a more personable and less polished — and possibly online — shopping experience, which they won’t get in a Macy’s or a J.C. Penney. Conversely, more conventional mall department store shoppers may not feel comfortable going on a so-called ‘treasure hunt’ when they’ve never done that at a department store before.

The popularity of thredUP may at least in part be driven by its anonymity.

Then there’s something of an X-factor that’s difficult measure. That is, these partnerships could wipe away any lingering hope that Macy’s and J.C. Penney had of restoring their former reputations as premier shopping destinations. As Alex Fitzgerald, consumer and retail expert with management consulting firm A.T. Kearney, put it , Macy’s will have to measure very carefully to see if “this is an effective acquisition tactic to lure the young consumer or if this negatively impacts their core offering.”

But, both retailers still see more upside than risk.

Michelle Wlazlo, vice president and chief merchant for J.C. Penney, commented “There’s an emotional thrill that comes with finding one-of-a-kind secondhand product for much less,” akin to the treasure hunt experience offered by the likes of TJX Companies (NYSE: TJX) or Ross Stores (NASDAQ: ROST) . Macy’s official announcement even referenced “the thrill of finding an unexpected gem at an unbelievable price.”

Clearly the idea is to sell thrills..

With just a few hundred square feet of selling space per in-store shop, however, there may not be enough treasures on-hand at any given time to attract a large number of new shoppers. Ross Stores and TJ Maxx locations are entire settings dedicated solely to the treasure hunt schtick, though. Ditto for Macy’s-owned BackStage, which can be used to offload the company’s clearance merchandise without damaging the look and feel of its full-priced selling space under the Macy’s moniker.

Indeed, placing heavily discounted thredUP merchandise in their stores tacitly sends a message to patrons that both Macy’s and J.C. Penney are fighting a losing battle. That can be something of a turn-off in and of itself.

Most onlookers like the idea all the same, believing sustainability-minded consumers will reward Macy’s and J.C. Penney by becoming a patron of stores where secondhand clothing is available. If that proves to be a draw, certainly both retailers will expand their used clothing programs.

That’s a tremendous “if” though. Clearly much could still go wrong.

Fortunately for both outfits, these pilot programs are starting out at a small scale and shouldn’t prove to be a significant distraction should they end up turning into more trouble than they’re worth.

10 stocks we like better than J.C. Penney
When investing geniuses David and Tom Gardner have a stock tip, it can pay to listen. After all, the newsletter they have run for over a decade, Motley Fool Stock Advisor , has quadrupled the market.*

David and Tom just revealed what they believe are the ten best stocks for investors to buy right now… and J.C. Penney wasn’t one of them! That’s right — they think these 10 stocks are even better buys.

Here’s what major analysts had to say about Salesforce earnings

Its Official. Waltonchain’s Mainnet is now LIVE and Open Source :...

Here’s How Many U.S. Households Will Run Out of Money in...

Apple’s HomePod Is Off to a Slow Start