The exit of National Security Advisor John Bolton from the White House makes it less likely the situation between the U.S. and Iran will escalate to a military conflict, analysts said.

Oil prices traded lower after President Donald Trump tweeted Tuesday that he asked Bolton to resign. Seen as the most hawkish member of the president’s cabinet, Bolton told NBC News that he was resigning on his own volition and that Trump had not asked him to leave. The White House said there were several reasons for Bolton’s departure and said it was not due tot he recent leaks about disagreement within the administration about a failed idea to hold talks with the Taliban at Camp David. 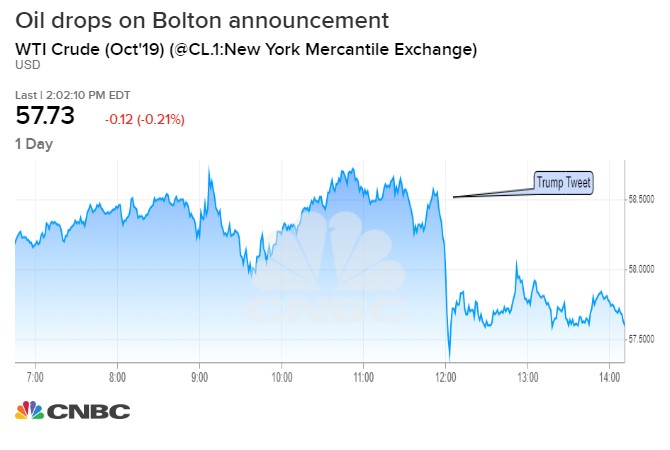 “This dials back fears of an attack on Iran,” said John Kilduff, partner of Again Capital. “His desire to attack Iran goes back to George W. Bush. The oil market was always on tenter hooks with him on the scene.”

Trump last year withdrew the U.S. from a nuclear deal between Iran, the U.S. and five other countries that removed sanctions from the country in return for its commitment to end its nuclear. Trump had said the agreement was one sided and too short term. both the president and Bolton had said the deal would still allow Iran to acquire a nuclear weapon.

The White House resumed sanctions on Iran, and has succeeded in forcing most of its oil exports off the market. Other members of the agreement have tried to keep Iran in the deal and France most recently offered to provide a credit line to Iran of $15 billion if it would end its uranium enrichment and recommit to the nuclear deal. Under that proposal, Iran would be allowed to resume export of 700,000 barrels a day of oil.

“Obviously, this increases the likelihood that Macron’s proposal will be accepted and the $15 billion credit line backed by 700,000 barrels a day is accepted,” noted Helima Croft, head of global commodities research at RBC. She said she does not see the proposal gaining acceptance as her base case, but a deal is certainly more “likely than it was yesterday.”

Bolton had opposed the deal, suggested by French President Emanuel Macron, as had Israeli Prime Minister Benjamin Netanyahu. Just Monday, Netanyahu reported a recent finding by Israel of a secret Iranian nuclear facility, which he said Iran destroyed this past summer.

Since sanctions began to squeeze Iran, tensions in the Gulf have increased, with Iranian proxies in Yemen sending missiles and armed drones into Saudi Arabia. Iran has also seized a U.K. tanker in the Strait of Hormuz and allegedly mined several others in the Gulf.

Iran also downed a U.S. drone fired a drone at a U.S. in June, which nearly triggered U.S. military action before Trump stopped it.

President George W. Bush (R) and Ambassador to the UN John Bolton (L) meet in the Oval Office of the White House December 4, 2006 in Washington, DC. Bush accepted Bolton’s resignation as Ambassador to the United Nations when his term is up in January 2007.

“Bolton pressed to attack Iran militarily at almost every turn,” said Kilduff. “I think in the aftermath of that drone attack he almost prevailed but President Trump pulled back at the last minute.”

West Texas Intermediate crude futures were slightly lower, and well off its highs of the day, after news of Bolton’s exit. WTI was at $57.76 per barrel, while Brent futures were up 0.3% at $62.77 per barrel.

Secretary of State Michael Pompeo, at a press briefing later in the day, said he could imagine Trump meeting with Rouhani later in the month, in response to a question.

“The president has made it clear. He’s prepared to meet with no pre-conditions,” said Treasury Secretary Steven Mnuchin, during the briefing. He also said the administration is committed to maintaining the maximum pressure on Iran.

Cliff Kupchan, chairman of Eurasia Group, said the future direction of U.S. policy will be determined by Trump’s views and his selection to replace Bolton. Bolton had opposed any talks with Iran, but Trump appears set on a meeting, he noted.

“It’s probably still unlikely that Supreme Leader Ali Khamenei will let that happen, but there’s upward pressure on the chance of a meeting. If it does happen, we’d see more downward umph on the oil price. Moreover, the former NSA was a key proponent of the aborted strike on Iran and of regime change there. The chance of US strikes on Iran, all else equal, also goes down with his departure,” according to Kupchan.

The removal of Bolton will impact some other key major policy areas.

“Bolton is a hyper-hawk. He was influential, and his removal will at least temper some administration policies. Issues affected will include Iran, North Korea, Afghanistan, and Venezuela,” Kupchan noted.

Bolton served in the Reagan administration, and Bush named him undersecretary of state for arms control and international security.

Bush also appointed him as his representative to the U.N., which Bolton called irrelevant. Ultimately, Congress blocked his confirmation and he had to step down from that role.

After bankruptcy, Gibson plots return to basics, and possibly ukuleles

Mortgage borrowers will be just fine when the economy slows |...