In the day just passed, the recent bond market selling-spree showed its first serious signs of leveling off since it began one week ago.  This wasn’t as triumphant is it sounds, however.  Treasuries were unwilling to follow European bond yields lower in the early morning hours.  Furthermore, after the very decent 10yr Treasury auction at 1pm, bonds were again unwilling to make noticeable improvements.  In short, bonds looked to be taking their seats ahead of today’s much-anticipated ECB announcement and press conference.

In the day ahead, bonds will see how well they can hold the gains that have arrived in the wake of a generally friendly ECB announcement (read the update on MBS Live).  A policy rate cut and re-upping of the ECB’s bond buying program helped push 10yr yields down to 1.68% by the start of domestic trading.  So far, Mario Draghi’s press conference hasn’t done any damage to the gains.  If anything, he helped Treasuries move back to post-ECB lows after they began to drift higher right at the open.

If bonds merely manage to hold the gains that are in place this morning, they will be taking the first step in breaking below the recent uptrend–at least in terms of the simplistic trend channel presented in the yellow lines below.  In the event that the run up to this afternoon’s 30yr bond auction (or anything else, for that matter) pushes yields back up, the highest yields of the past 2 days advocate watching a ceiling at 1.775.  Before that, there is a shorter-term pivot point ceiling to consider at 1.73% (where 10s were trading for 4 straight hours before the ECB announcement). 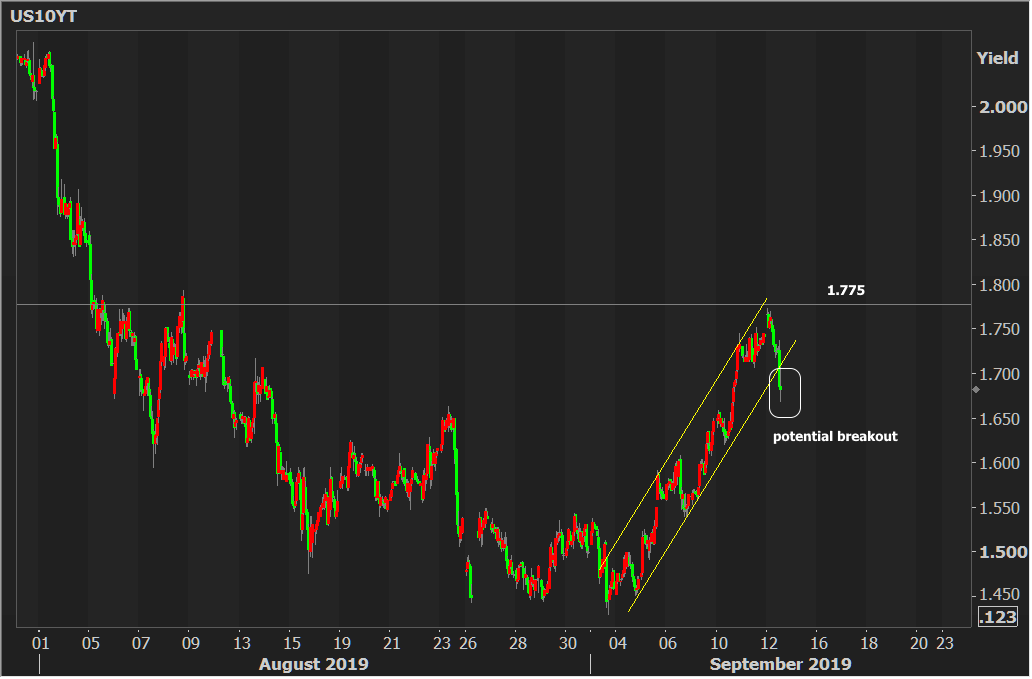 How to Calculate the Beta of a Private Company

Giving back and getting more

Best cash back cards for parents