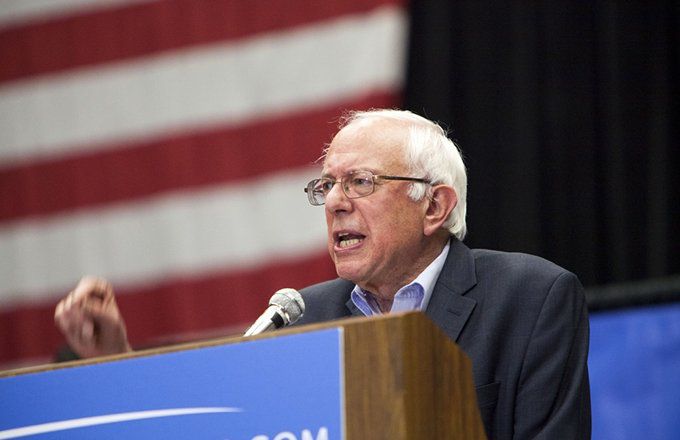 Bernie Sanders has come a long way from the underdog position he held in 2016. The Vermont senator has been second or third in most Democratic primary polls, appearing on popular talk shows, adding celebrities and major unions to his list of endorsers, and is credited with paving the way for younger Democratic Socialists like Alexandria Ocasio-Cortez and Rashida Tlaib. Modern Monetary Theory, the controversial economic theory espoused by his senior economic adviser Stephanie Kelton, has also gained supporters since the last time Sanders ran.

It’s likely Sen. Bernie Sanders will not win the Democratic primaries this time either, but the 78-year-old’s name has become synonymous in the U.S. with a movement on the left that has energized scores of progressive young people and dramatically altered how many Americans see their lives and government policy interacting.

Which is why Sanders’ economic agenda deserves attention. Critics who don’t “feel the bern” can no longer dismiss him as an angry “communist” with no understanding of American values. His platform has already made mainstream ideas like Medicare-for-All and will no doubt be used by future leaders hoping to take it forward.

Sanders says every person in the U.S. is entitled to a decent job and a living wage, quality health care, a complete education, affordable housing, a clean environment and a secure retirement. “This is the richest country on Earth and we have 40 million in poverty, 34 million with no health insurance and half our people living paycheck to paycheck,” he wrote on Twitter. “I refuse to accept that as normal.”

He has called for a 21st Century Economic Bill of Rights, referencing the first 10 amendments to the U.S. constitution guaranteeing civil rights and liberties. Interestingly, President Franklin D. Roosevelt proposed a second Bill of Rights focused on economic security after his 1944 State of the Union speech. Sanders called it “one of the most important speeches ever made by a president” in 2015 and added that “it has not gotten the attention that it deserves.”

Here we break down the key elements of his plan to deliver these rights to the American people.

Health Care a Right, Not Privilege

At the center of Sanders’ campaign is his proposal to give every American health insurance under a government single-payer system. Sanders also wants to lower the price of prescription drugs with three different bills which will allow the government to negotiate prices with Big Pharma, allow patients to import drugs from overseas and peg prices to the median drug price in Canada, the U.K., France, Germany and Japan, respectively.

About 30 million Americans are currently uninsured, and as Sanders correctly points out, the U.S. spends a much higher amount each year on health care than most major countries, as demonstrated in the chart below.

Sanders wants to cancel the $1.6 trillion in student debt held by 45 million people. He says this will give graduates the freedom to pursue careers of their choice, narrow the racial wealth divide and boost the economy by $1 trillion over the next 10 years. The $1 trillion figure comes from a paper written by a group of academics including Kelton.

In a speech, he also said he wants to cancel all medical debt. His proposal isn’t ready yet, but Sanders’ campaign told CNN it would eliminate an estimated $81 billion in medical debt and reform a 2005 federal bankruptcy law.

Sanders, not known for his subtlety, also wants to guarantee higher education as a right for all and will pay for this and canceling student debt by taxing “Wall Street gambling.” This financial transaction tax (FTT) will be a 0.5% tax on stock trades, a 0.1% fee on bond trades, and a 0.005% fee on derivative trades. This is expected to raise $2.4 trillion over 10 years, according to research by left economist Robert Pollin cited by Sanders. Currently 40 countries have FTTs and the concept goes as far back as the Great Depression. British economist John Maynard Keynes was one of its earliest proponents and suggested in The General Theory of Employment, Interest, and Money the U.S. should introduce “a substantial government transfer tax on all transactions” on Wall Street in order to curb “the predominance of speculation over enterprise.”

Besides raising the federal minimum wage to at least $15 an hour and doubling union membership during his first term in office, Sanders wants to enact a federal jobs guarantee and work toward a a full-employment economy. A job guarantee is actually a proposal borrowed from Modern Monetary Theory.

He wants to stop corporations from sending jobs overseas by eliminating tax deductions, include labor, environmental, and human rights standards and rules against currency cheating in every U.S. trade agreement and expand “Buy American” government policies.

Sanders has said he would be an “Organizer in Chief” so it’s worth mentioning that his Workplace Democracy Plan to reform labor laws and strengthen unions is perhaps one of his most detailed so far. If the concerned bill is passed, the National Labor Relations Board (NLRB) will certify unions that receive the consent of the majority of eligible workers, instead of employers. “If employers refuse to negotiate in good faith, we will impose strong penalties on those companies.” This would reverse a law passed in 1947.

Sanders’ campaign doesn’t yet have a plan for reforming Wall Street as detailed as Sen. Elizabeth Warren’s, but he does want to reinstate the Glass-Steagall Act, cap credit card and consumer loans interest rates at 15%, expand basic and affordable banking services offered by post offices, audit the Federal Reserve, reform credit rating agencies and curb speculation with the tax mentioned earlier.

As President, he will pass legislation that will establish a progressive estate tax on the wealth of the top 0.2%, tax the money corporations hold offshore at the full corporate tax rate and scrap the income limit on Social Security payroll taxes. Sanders wants to also “end special tax breaks on capital gains and dividends for the top 1% and substantially increase the top marginal tax rate on income above $10 million.”

Sanders has his own version of a Green New Deal. The goal of the plan is to reach 100% renewable energy for electricity and transportation by 2030 and complete decarbonization by 2050 at latest.

It involves a $16.3 trillion public investment and the creation of 20 million “good paying, union jobs with strong benefits and safety standards” in steel and auto manufacturing, construction, energy efficiency retrofitting, coding and server farms, renewable power plants and sustainable agriculture. If elected, he also promises to ban fracking and mountaintop removal coal mining. Sanders will promote electric vehicles with $2.09 trillion in grants for families and $85.6 billion on a national electric vehicle charging infrastructure. (Why is Elon Musk still not a fan? Well…)

The campaign website says the plan will basically pay for itself. Sanders will target the fossil fuel industry with litigation, fees, taxes, and eliminating federal fossil fuel subsidies.He also says there will be cuts in military spending, since the U.S. will not be fighting expensive wars to protect its access to oil abroad, and an increase in tax revenue and decrease in safety net spending due to the new jobs created.

Mining Bitcoin | Where Are The Cheapest Places For Mining?

11 Mindset Shifts You Need to Scale Past 7 Figures

How Well Does Your State Protect You From the Aftermath of...

Global markets are rallying on China and Jamie Dimon