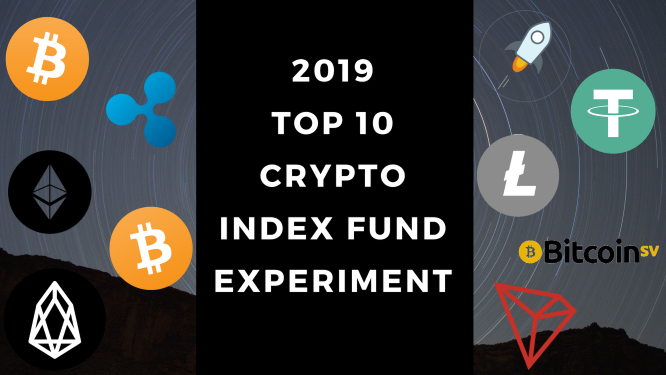 tl;dr – September marked the third down month in a row, Bitcoin maintains overall leader position followed by Litecoin, and Bitcoin dominance retreats a bit. At this point in the year the 2019 Top Ten portfolio is up +$195 (20%) which is about how much I’d be up if I just stuck to the S&P 500. I’ll release the 2018 Top Ten update tomorrow.

Instead of hypothetically tracking cryptos, I made an actual $1000 investment, $100 in each of the Top 10 cryptocurrencies by market cap as of the 1st of January 2018. I then repeated the experiment on the 1st of January 2019. Think of it as a lazy man’s Index Fund (no weighting or rebalancing), less technical, more fun (for me at least), and hopefully still a proxy for the market as a whole – or at the very least an interesting snapshot of the 2019 crypto space. I am trying to keep this project simple and accessible for beginners and those looking to get into crypto but maybe not quite ready to jump in yet.

Buy $100 of each the Top 10 cryptocurrencies on January 1st, 2019. Hold only. No selling. No trading. Report monthly. Compare loosely to the 2018 Top Ten Experiment.

September was another down month for the 2019 Top Ten. While not as bloody as August, all cryptos ended the month in the red except Tether and Ethereum, both of which ended September basically flat. Again, when Tether finishes ahead of the pack, you know it’s been a bad month. This is now two months in a row that Tether has outperformed its Top Ten peers.

We have now observed three straight downward months after a nice five month streak of either gains or sideways movement earlier in the year. The 2019 Top Ten portfolio is up +19.5% on the year, which sounds respectable enough, but here’s some perspective: the end of May saw this same portfolio up +114%.

The 2019 Top Ten portfolio is now up about the same as the US stock market as measured by the S&P 500 (see below). We haven’t seen such similar performance since March 2019.

Half the cryptos were on the move this month. Litecoin and Bitcoin Cash both dropped one position while EOS, Stellar, and Tether advanced. Tether actually moved up two places and now holds the #4 position. But again, when Tether gains/advances in rank, it’s a sign of a bad month.

Stellar clawed itself back into the Top Ten (again) so now Tron stands alone as a Top Ten dropout, replaced by Binance Coin. Tron is still way down at position #14.

Only having one of the original cryptos bumped out of the Top Ten is actually much better than the 2018 Top Ten Experiment group, who already saw three coins drop out by September 2018.

September Winners – For the second month in a row, I have to give it Tether. Ethereum finished second by not losing any value.

September Losers – Although it managed to retain its position at #9, Bitcoin SV lost -36% of its value in September making it easily the worst performing crypto in the experiment. The second place goes to Bitcoin Cash, down -24.

BTC and Litecoin are convincingly ahead of their peers, up +122% and +80% respectively this year. My initial $100 investment in Bitcoin is now worth $226.

The majority of the Top Ten cryptos are still either flat or in positive territory. The exceptions are Ripple, Stellar, Bitcoin SV, and Tron. Stellar remains squarely at the bottom, down -47% so far in 2019, followed by Ripple, down -29%.

For the third straight month, the total crypto market cap decreased, losing about $47B in September. The overall market cap is sitting around the $222B mark, a level we last saw in May 2019.

It’s not all bad news: there has been an increase of +74% in total crypto market cap since the beginning of 2019.

I’m down significantly in my 2018 Top Ten Index Fund Experiment. If I cashed that group out today, the $1000 initial investment would return about $175, down nearly -83%.

Although the crypto space has seen three consecutive down months, the market as a whole is still up +74% on the year. In comparison, how have the 2019 Top Ten cryptos done? Up +20%. That’s less than a third of the return of the overall market.

As a reminder, in May 2019, the gains from the Top Ten and the entire market were both exactly the same amount: +114%. The last few months have seen that gap widen: for four straight months, focusing only on the Top Ten has been a losing strategy. This is reminiscent of last year as at no point in the Top Ten 2018 Experiment did the Top Ten strategy outperform the overall market.

I’m also tracking the S&P 500 as part of my experiment to have a comparison point with other popular investments options. The S&P 500 is up +19% since the beginning of 2019. This is now equal to the 2019 Top Ten portfolio, a scenario we haven’t seen since March 2019. For reference, the gap has been extremely wide at different points during the year. For example, the Top Ten portfolio was up +114% compared to +10% for the S&P in late May of this year.

The initial $1k investment I put into crypto would have yielded +$190 had it been redirected to the S&P. This is now approximately equal to the value of the 2019 Top Ten Crypto portfolio.

September was an eventful month for the Top Ten crypto portfolio: it marked the third straight monthly decline in value; Bitcoin’s dominance finally retreated a bit; and the return of the S&P broke even with the Top Ten portfolio for the first time since March. As we head into the last quarter of the year, can the positive momentum that crypto held earlier in the year be recaptured?

After last year’s experiment ended, I decided to do two things:

Thanks for reading and the support for the experiment. I hope you’ve found it helpful. I continue to be committed to seeing this process through and reporting along the way. Feel free to reach out with any questions and stay tuned for progress reports.

Tether Has No Real Impact on Bitcoin price: University Researcher

How Women Should Be Championing Female Leadership, Post #MeToo

Major Retailers Like Whole Foods Accept Bitcoin, Is This Enough To...