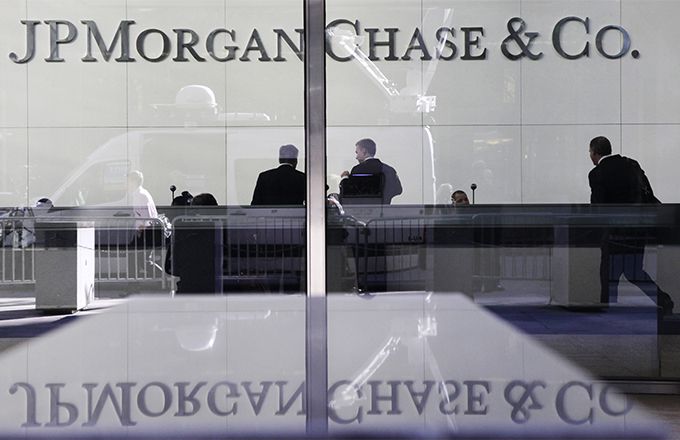 JPMorgan Chase & Co. (JPM) is the largest of the four “‘too big to fail” money center banks and is the only major bank in the Dow Jones Industrial Average. The financial giant reported earnings before the opening bell on Tuesday, Oct. 15, and posted a solid beat. In response, JPMorgan stock traded to a new all-time intraday high of $121.14, which is between its semiannual pivot at $118.51 and its quarterly risky level at $122.26, where my analytics show that profits should be taken.

In its discussion of today’s earnings beat, JPMorgan touted that its fixed income revenue surged as U.S. Treasury yields declined, which more than offset a slide in equity market revenues. CEO Jamie Dimon opined that the U.S. GDP growth slowed slightly while consumers remained healthy with growth in wages, and hence spending is strong. Things are more cautious on the business side given geopolitical risks and global trade tensions.

The daily chart for JPMorgan

The price gap higher on April 12 was a positive reaction to earnings released before that day’s open. The close of $111.80 on June 28 was another input to my analytics and resulted in the semiannual pivot for the second half of 2019 at $118.51. This level has been a magnet between Sep. 13 and this morning. The close of $117.09 on Sep. 30 was an additional input to my analytics and resulted in a monthly pivot for October at $118.86 and the fourth quarter risky level at $122.26, where profits should be taken.

The weekly chart for JPMorgan

Trading strategy: Buy JPMorgan stock on weakness to its annual value level at $102.64 and reduce holdings on strength to its quarterly risky level at $122.26. Its semiannual and monthly pivots are $118.51 and $118.86, respectively.

How to use my value levels and risky levels: Value levels and risky levels are based upon the last nine monthly, quarterly, semiannual, and annual closes. The first set of levels was based upon the close on Dec. 31, 2018. The original annual level remains in play. The close at the end of June 2019 established new semiannual levels, and the semiannual level for the second half of 2019 remains in play. The quarterly level changes after the end of each quarter, so the close on Sept. 30 established the level for the fourth quarter. The close on Sept. 30 also established the monthly level for October, as monthly levels change at the end of each month.

My theory is that nine years of volatility between closes are enough to assume that all possible bullish or bearish events for the stock are factored in. To capture share price volatility, investors should buy shares on weakness to a value level and reduce holdings on strength to a risky level. A pivot is a value level or risky level that was violated within its time horizon. Pivots act as magnets that have a high probability of being tested again before their time horizon expires.

How to use 12 x 3 x 3 weekly slow stochastic readings: My choice of using 12 x 3 x 3 weekly slow stochastic readings was based upon backtesting many methods of reading share-price momentum with the objective of finding the combination that resulted in the fewest false signals. I did this following the stock market crash of 1987, so I have been happy with the results for more than 30 years.

The stochastic reading covers the last 12 weeks of highs, lows, and closes for the stock. There is a raw calculation of the differences between the highest high and lowest low versus the closes. These levels are modified to a fast reading and a slow reading, and I found that the slow reading worked the best.

The stochastic reading scales between 00.00 and 100.00, with readings above 80.00 considered overbought and readings below 20.00 considered oversold. Recently, I noted that stocks tend to peak and decline 10% to 20% and more shortly after a reading rises above 90.00, so I call that an “inflating parabolic bubble,” as a bubble always pops. I also refer to a reading below 10.00 as “too cheap to ignore.”

New Wormhole Wallet Can Create Tokens and Crowdsales in Minutes