With NFP coming out just slightly weaker than expected and the bond market not undergoing much of a reaction in either direction, the rest of the day becomes a relative non-event in the bigger picture.  This is in the same vein as a much bigger anticlimactic de-escalation seen earlier this week with respect to the potential for war to break out in the Middle East.  If such a thing had happened, bonds would surely have broken the lower boundary of the prevailing yield range.  Since it didn’t happen, here we are again… stuck in the middle. 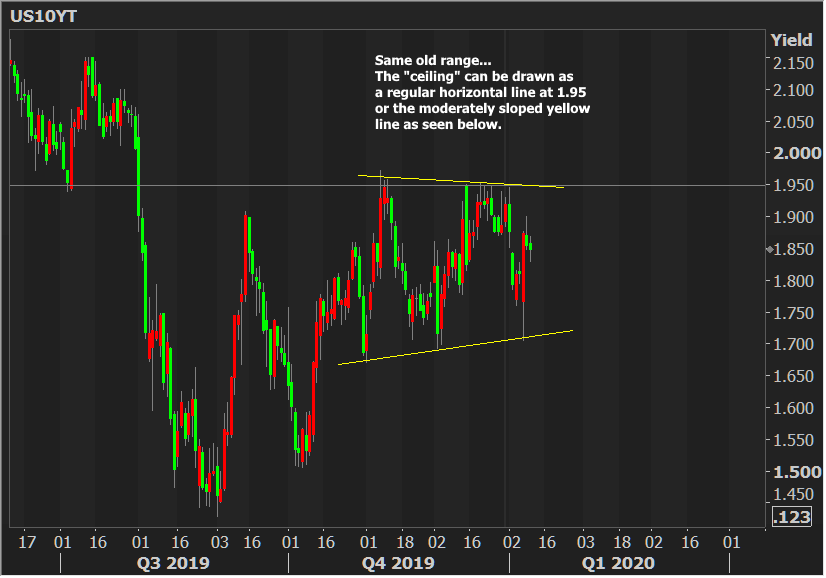 Without a war, or a major development on the US/China trade deal, the market will be forced to get back to the business of following along with economic data.  That, too, is a challenge due to the lingering and uncertain impact on business confidence (and actual balance sheets) from tariffs and the trade war.

It’s not that markets won’t trade econ data, just that the level of impact from certain reports will be less than past precedent suggests.  Other reports (like those that speak to the manufacturing-related impact from trade issues) can be more important than normal.  In general though, bonds will be forced to look beyond the data at even bigger macro factors.

As much as I’d prefer to avoid it, this means the 2020 presidential election will quickly become a key talking point for markets.  Interestingly enough, it’s not exactly a black and white issue in the same way it was in 2017 and 2018.  During that time, Trump was unequivocally bad for rates for several key reasons.  Then in 2019, Trump was the single biggest ally of low rates due to escalation in the US/China trade war.  The moral of the story is that there’s still a ton of implied uncertainty surrounding the policy path of whoever the next president may be.

How does all this relate back to today?  Well… we just had the month’s biggest piece of economic data and essentially no bond market reaction in the bigger picture.  Granted, the number wasn’t very far from forecast, but that hasn’t stopped bond markets from moving much more than this after past instances of small misses in NFP.  Bottom line, it’s a sign of the uncertain times and we’re in a waiting game to see what may change that and when.

End of a New Residential subservicing agreement to benefit Ocwen

Past Examples of Trips to All-Time Yield Lows

Politics is becoming a minefield for the travel and hospitality business