The rate of loans at least one payment late but not yet in foreclosure for one-to-four unit properties was 3.77% on a seasonally adjusted basis, according to the MBA’s National Delinquency Survey. This was down 20 basis points from the third quarter and 29 bps from the fourth quarter of 2018.

This was the lowest level of late payments since the MBA started tracking this data in 1979, according to Marina Walsh, the group’s vice president of industry analysis.

“Mortgage delinquencies track closely to the U.S. unemployment rate, and with unemployment at historic lows, it’s no surprise to see so many households paying their mortgage on time,” Walsh said in a press release. “Signs of healthy conditions were seen in other parts of the survey. The foreclosure inventory rate — the percentage of loans in the foreclosure process — was at its lowest level since 1985.” 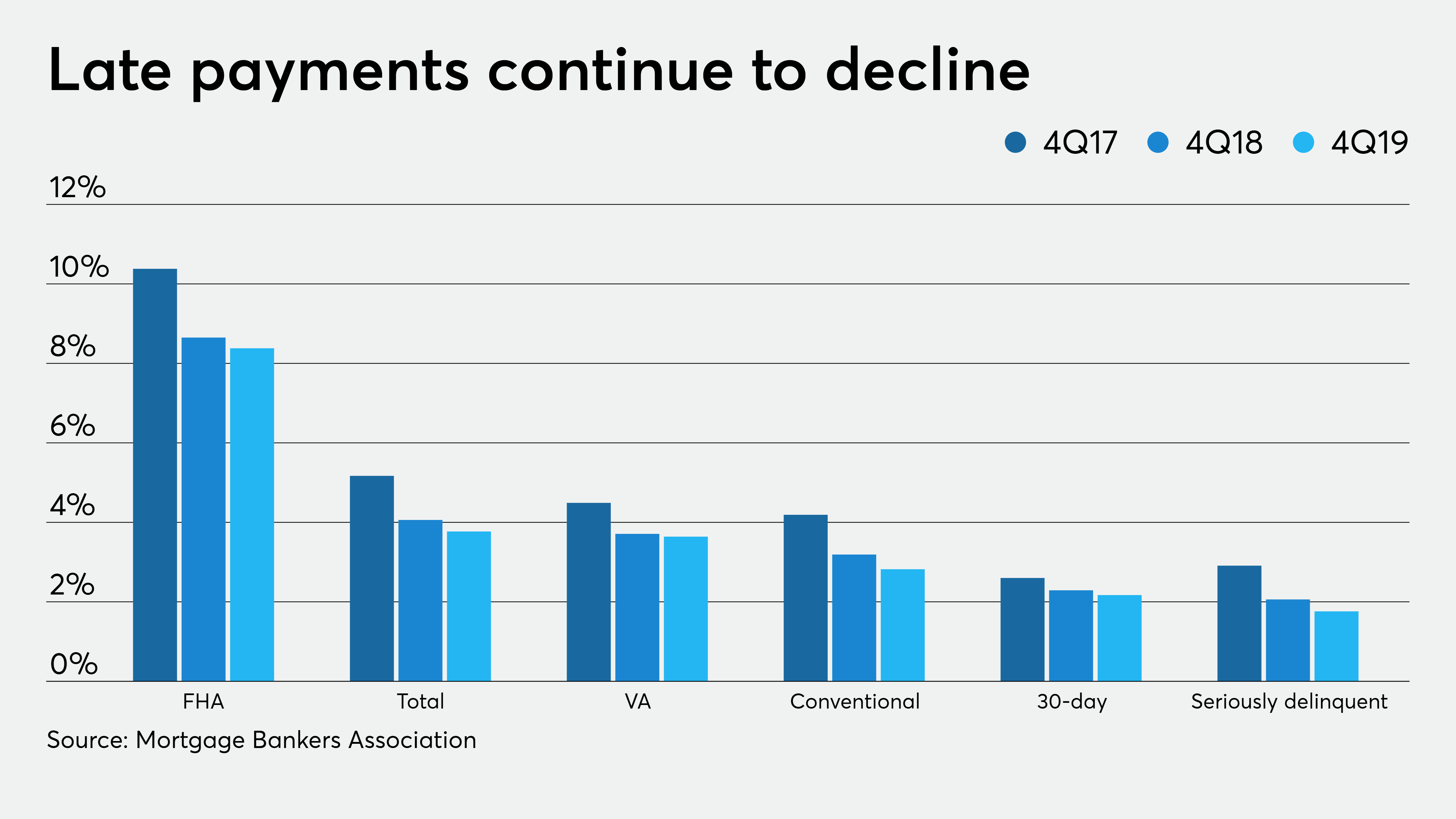 “Furthermore, states with lengthier judicial processes continued to chip away at their foreclosure inventories, and it also appears that with home-price appreciation and equity accumulation, distressed borrowers have had alternative options to foreclosure.”

The percentage of loans in the foreclosure process at the end of the fourth quarter was 0.78%, down 6 bps from the third quarter and 17 bps lower than one year ago.

The seriously delinquent rate, the percentage of loans that are 90 days or more past due or in the process of foreclosure, was 1.76%, down 5 bps from the third quarter and 30 bps from one year ago. It is at its lowest level since the third quarter of 2000.

Separately, CoreLogic said 3.9% of all mortgages were in some stage of delinquency (either 30 days or more late or in foreclosure) in November, down from 4% the prior year.

The serious delinquent mortgage rate remained at 1.3%, where it has been since April. That is still 0.2 percentage points lower than the previous November.

“Natural disasters often cause spikes in mortgage delinquencies that gradually recede,” Frank Nothaft, CoreLogic’s chief economist, said in a press release. “The CoreLogic 2019 Natural Hazard Report revealed that delinquency rates in Panama City, Fla., nearly tripled in the immediate aftermath of Hurricane Michael in October 2018, but fell back to trend levels by late 2019.”

“In the Southeast, the 2018 hurricane season left higher overall delinquency rates in its wake, but the region is finally on the mend,” said Frank Martell, president and CEO of CoreLogic. “In the Midwest, we see a somewhat different picture. Of the 50 metro areas that experienced increases in overall delinquency rates in November, nearly half were in the Midwest. Still, as mortgage rates reach a three-year low, we could expect to see stabilization across markets heading into 2020.”

Bitcoin Price Dips Below $8,000, Wider Market Struggles to Hold Above...

Why You’re Smart to Buy Disney

Easy ways to save money with your credit cards

Central Ohio homes for sale on the rise, breaking run of...

Borrowers Get Ahead of Tax Changes, Refinance Activity Up in December