The closing has been the most challenging part of the origination process to completely automate, but new government policy and technology will bring the industry closer to that goal this year.

“A number of different things are converging. I do think it’s time to tackle this and really bring it all together for customers,” said Tom Wind, executive vice president of consumer lending at U.S. Bank.

There are various types of hybrid processes that lenders can use to handle much of the closing process electronically in all 50 states. But as policy and adoption continue to evolve, additional comprehensive e-closing functionality is becoming more broadly possible, too.

For example, the majority of counties are able to electronically record security instruments that establish property liens, and 22 states currently allow or are in the process of implementing remote online notarization. In addition U.S. Bank and other lenders have begun working with Blend — a fintech focused on point-of-sale software — to develop automation aimed at integrating all the disparate elements and parties involved in the closing into a more singular experience for users. The company’s particular effort to do this is notable in that some influential lenders are part of Blend’s disparate user base. 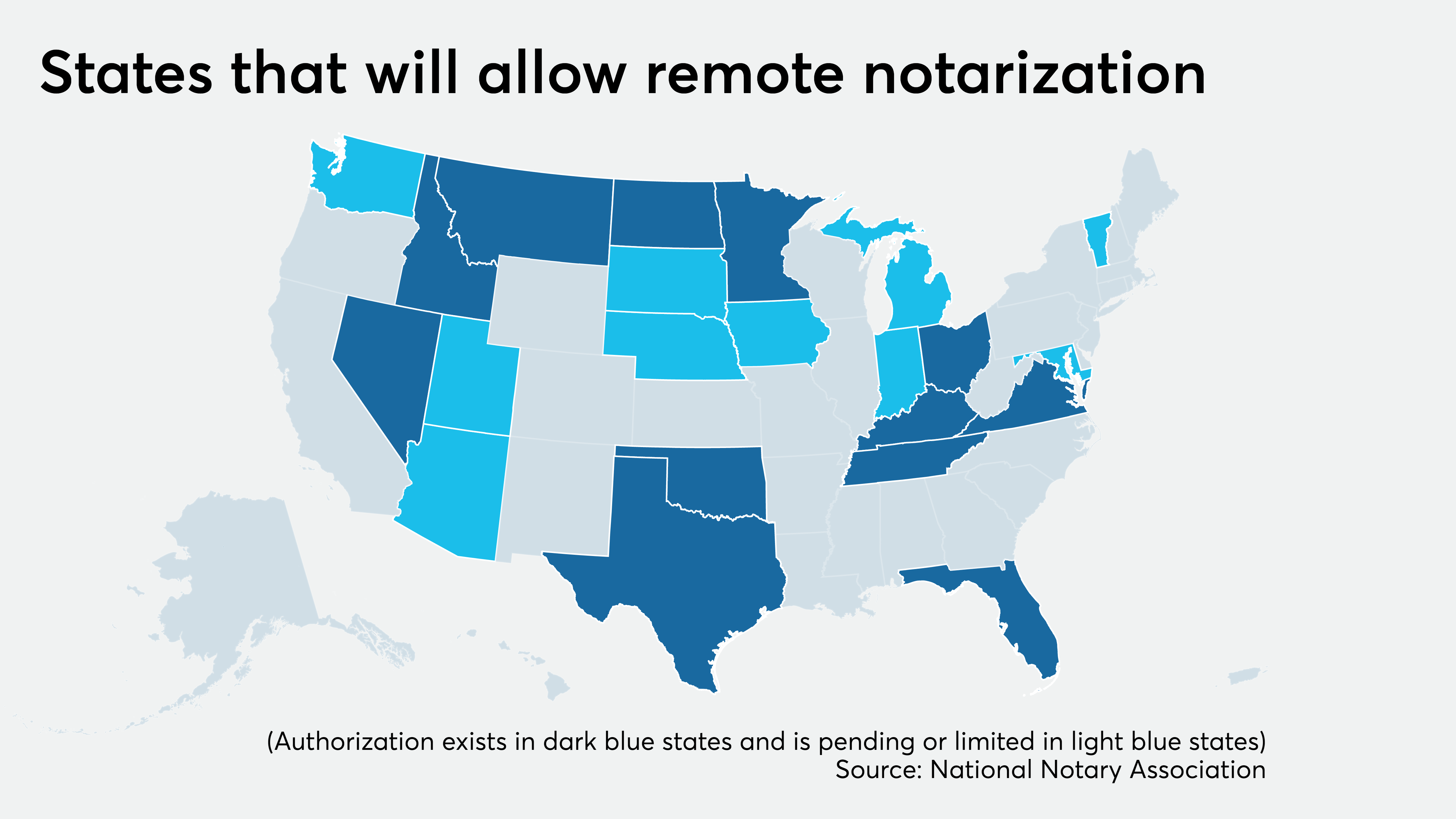 “This isn’t just about making it all electronic. It’s about making that process easier and facilitating our role as the adviser to our customers. We want the capability to provide information and get customers documents early so they can review them,” said Wind. “On refinance transactions and home equity transactions, I think it’s becoming more and more the standard.”

But while e-closing has become more common in those real estate-secured lending sectors, hurdles remain in purchase market, he noted.

“The last piece that really has to fall into place on purchase transactions is the coordination with the title companies,” said Wind. “I think as we go forward those companies will start to see that there is a benefit for them to start to work on available platforms. I think we’ll see adoption pick up due to the push from the consumer and business side to have it done that way. Blend taps into a number of large lenders, so there’s a significant amount of industry volume being addressed there. That will make it more and more worthwhile for agents to go in that direction. Plus it’s becoming more and more the expectation for consumers to be able to sign things electronically and close when they want to.”

But although momentum is picking up, comprehensive adoption of an e-closing process could still take some time to fully materialize.

“The landscape is shifting pretty quickly, but I think this is a pretty nascent time in this space. It is going to continue to evolve,” said Nima Ghamsari, CEO and founder at Blend.

That’s because while headway is being made, there are still a lot of complexities to sort out, said Mark Ladd, a vice president of regulatory affairs at Simplifile, part of ICE Mortgage Services.

“The impact of the county recorder on electronic closings [for example] is highly nuanced, but can be summarized in a few key points,” he said. “When it comes to technology capabilities, about two-thirds of counties, which represent 84% of the U.S. population can e-record. However, on the policy side, only about 40% of counties are accepting electronically signed and notarized documents.”

“What this means in actual practice is that you have to examine the geographic footprint of your business. In some areas, you will be able to be highly successful with electronic closings, while in other areas it will be more challenging. As more states finalize their electronic notary regulatory policy, adoption will be easier.”

The Top Billionaire in Barbados

5 Things To Know Before Getting A Credit Card

How Inflation Matters in The Bigger Picture

Sharing miles with friends, family: These airlines allow it

An Update on MBS Underperformance vs Treasuries