Fidelity National Financial reported a huge 675% increase in fourth-quarter net earnings, which benefited from the surge in title orders for refinances.

Title orders opened rose to 492,000 in the fourth quarter from 379,000 in the prior year. But the average fee per file fell 15% to $2,384 as refinancings increased to half of Fidelity’s fourth-quarter volume from just one-third for the same period in 2018. 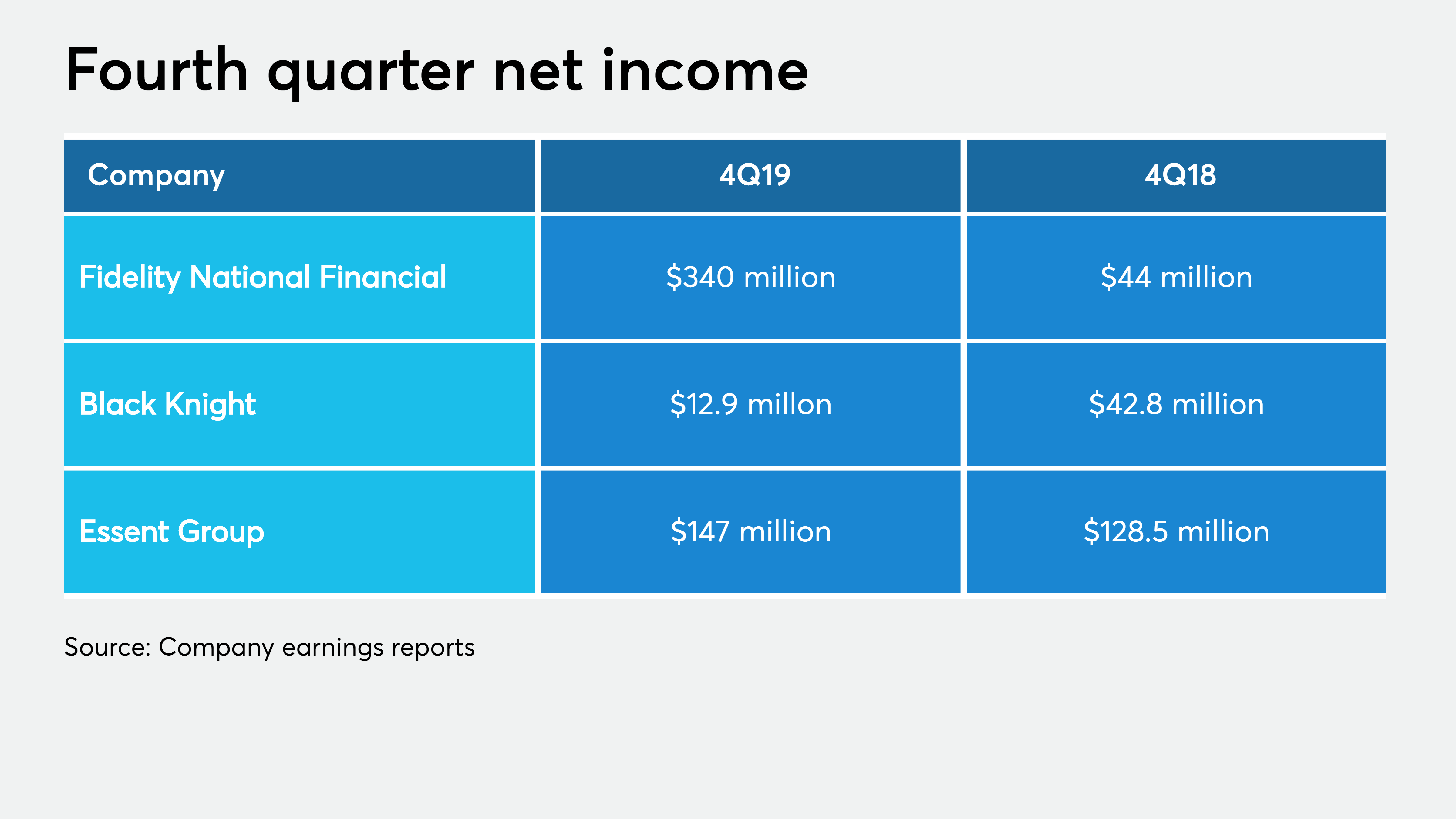 Meanwhile, Fidelity has moved on from its failed attempt to purchase Stewart Information Services. It agreed to acquire the 92.1% it doesn’t already own of FGL Holdings (F&G), a life insurance company for $2.7 billion in cash and stock.

“After three years as a minority owner and with the advent of new leadership at F&G, we decided to acquire the remaining interest in F&G as a way to diversify our earnings and reduce the risk and volatility inherent in our stand-alone title operations,” William Foley, Fidelity’s chairman, said in a press release. “F&G offers an attractive return on our capital investment in an industry with strong secular growth tailwinds that will perform well in economic environments that may be more challenging for title insurance.”

Black Knight, the former Fidelity subsidiary where Foley is also the chairman, reported a 70% decrease in fourth-quarter earnings to $12.9 million from $42.8 million for the same period in the prior year. The year-over-year decrease was a result of Black Knight’s indirect investment in Dun and Bradstreet and the resulting purchase accounting adjustments, restructuring and other non-operating charges, which reduced current period net earnings by $36.1 million.

Operating income from its software solutions business — which includes its mortgage servicing platform and loan origination system — was $119.3 million for the fourth quarter, up from $114.1 million one year prior.

On Feb. 12, Black Knight purchased the source code for Quicken Loans’ “Cyclops” mortgage servicing customer relationship management software. This software will serve as the foundation for a customer service solution that Black Knight will be offering its MSP servicing system clients. Financial terms were not disclosed.

Separately, Essent Group, the Bermuda-based parent of private mortgage insurer Essent Guaranty, had fourth-quarter net earnings of $147 million, up from $128.5 million one year prior.

“During the quarter we were pleased with Moody’s upgrade of our financial strength rating to A3,” Essent Group Chairman and CEO Mark Cassele said in a press release. “We believe that this upgrade is a validation of our progress in making Essent a stronger and more sustainable franchise through the programmatic use of reinsurance.”

Essent Guaranty had $15.8 billion of new insurance written during the quarter, down from $18.7 billion in the third quarter but up from $11.4 billion in the fourth quarter of 2018. Just over 28% of its fourth-quarter NIW came from refinancings.

How to List Beneficiaries for Life Insurance While Having a Trust

Millennials Do Use Credit Cards!

Bitcoin drops after dramatic gains ahead of futures launch

Chinese crypto billionaire calls out for keeping calm and hodling :...

Should you get a new credit card for Black Friday and...

Mortgage lenders’ tolerance of high DTIs may not get much higher

Why experts think Amazon HQ2 will land in Atlanta or Northern...