Franchisees of Remax Holdings’ Motto Mortgage combined to originate over $1 billion in loans in the organization’s third year of operations.

The Motto Mortgage brand now operates 111 offices originating loans in over 30 states. They combined to do $1.1 billion during 2019.

Real estate franchisor Remax introduced the Motto Mortgage brand in October 2016. Franchisees own the Motto Mortgage office brokerages and each are required to have their own licensing and for selling its production to wholesalers. Remax does not get any per loan compensation. 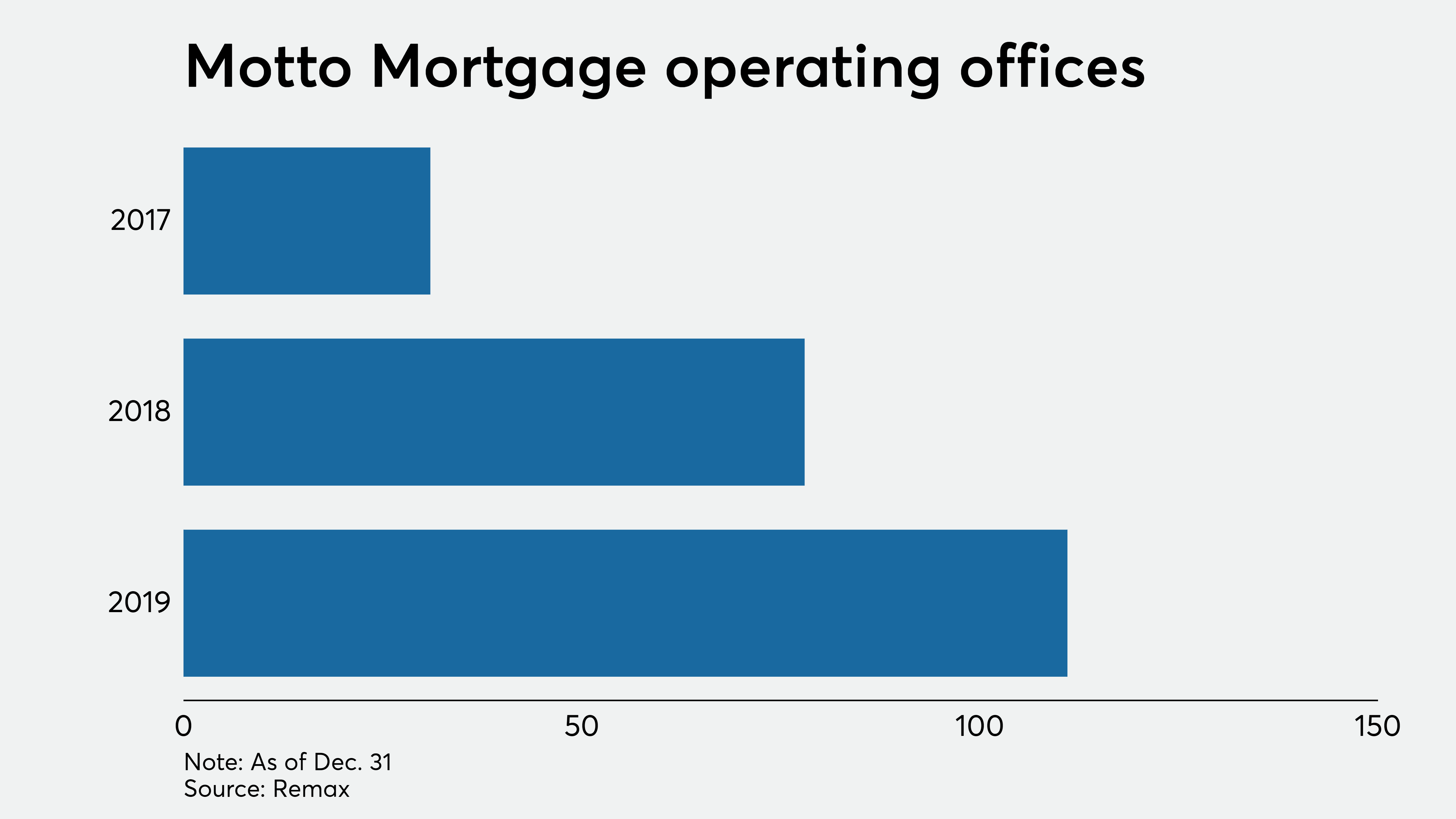 “Closing more than $1 billion in loan volume is a major milestone for any mortgage company,” Ward Morrison, president of Motto Franchising, said in a press release. “The fact that the Motto Mortgage network of offices were able to accomplish this in only three years showcases the momentous success of the Motto Mortgage brand.

“More importantly, the closed loan volume represents the families across the nation that loan originators in the Motto Mortgage network served in 2019. I am proud of our franchisees and look forward to continued momentum in the years ahead,” Morrison said.

Several real estate brokerage franchisors expanded their offerings to the finance side of the transaction. For many years, Realogy had a joint venture with its former Cendant corporate sibling PHH. After that joint venture was dissolved, Realogy created a new business with Guaranteed Rate.

Executives at Keller Williams in 2015 purchased a lender and later rebranded it to Keller Mortgage. During 2017, Redfin started a mortgage banking company. Berkshire Hathaway’s HomeServices of America also owns a mortgage banker.

But unlike Remax, none of those looked to take the franchise model to the mortgage business.

In October 2019, Motto sold its 150th franchise (it typically takes over a year because of licensing and other requirements before a franchise can start originating). “This growth demonstrates the demand and potential of our business model,” Morrison said at the time. “But more than that, our network of Motto Mortgage broker owners includes family-run operations and multigenerational ownership. Together, we’re strengthening communities and fortifying the American dream.”

Massive Growth by P2P Exchange and AT&T Accepting BCH in the...

Why Are Mutual Fund Fees So High? This Billionaire Knows

Harvard Is Vaulting Workers Into the Middle Class With High Pay....

Why IPO Star Uber Faces A Rough Road Ahead

Housing inventory could flatline as mortgage rates rise in 2019: SIFMA

Freddie Mac earnings mixed as it builds net worth