2012 was almost all about the European systemic crisis, although doubts remained about the US economic lift-off as well.  All of the above played out against the background of a generally supportive Federal Reserve.  In the summertime, QE was in one of its off cycles and traders increasingly began to expect QE3.  Europe was terrified that Greece had set a precedent for Spain, and the latter quickly came into focus at the end of May.  By July, the Spanish situation had come to a head, and Italian spreads were coming along for the ride.  Basically, the EU was worried that Greece began a domino effect that threatened the collapse of the union.  Credit spreads reached their apex in late July and global financial markets were heavily hiding in US Treasuries.  EU credit spread spikes line up perfectly with the US yield lows, but a few instances of weak US econ data helped the move. 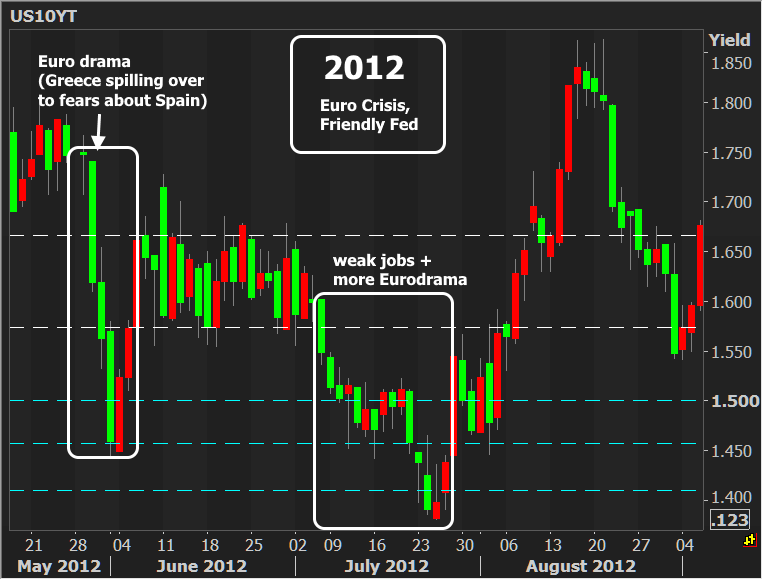 2016 was fairly different.  Whereas 2012 was a slow-motion train wreck fueled by a daily feast of disconcerting European headlines, 2016 was a combo platter comprised of general economic concerns and Brexit.  The general concerns were well-founded as 2015 is still considered by many to have been a “stealth recession.”  In other words, US growth didn’t turn negative for more than 1 quarter, but the more meaningful monthly econ reports shifted notably.  It’s not unfair to say there was an economic contraction underway, and that was especially true for the manufacturing sector (US PMIs were in contractionary territory at the end of 2015).  All that to say, markets were still jittery in mid-2016 and then Brexit cast a boatload of uncertainty into the mix.  Markets slowly began believing in the future again, but it really wasn’t until Trump was elected that yields jumped aggressively (not pictured in the chart). 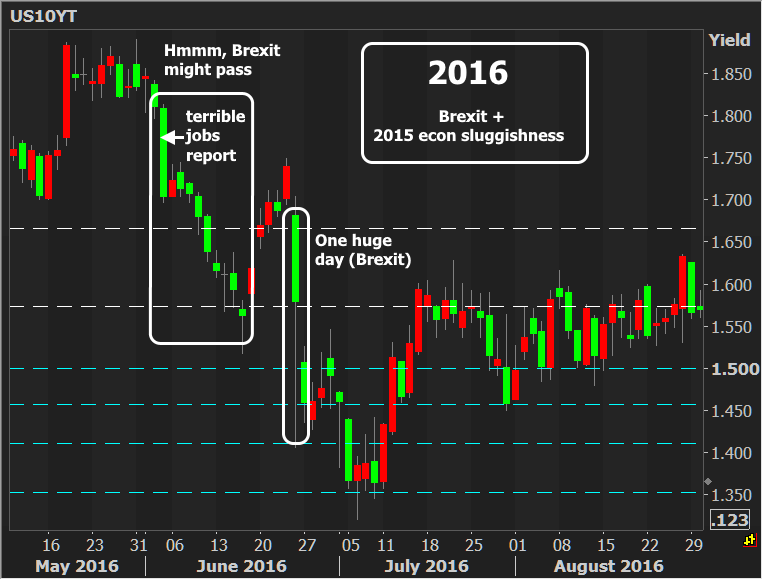 This time around, of course, coronavirus is the talk of the town (with the town being the entire freaking planet).  This is a distinctly different sort of market mover than the previous 2 trips to all-time lows.  The destruction of demand and commercial activity has been immediate and unequivocal.  There’s no doubt that this trip to all-time lows draws inspiration from that destruction. 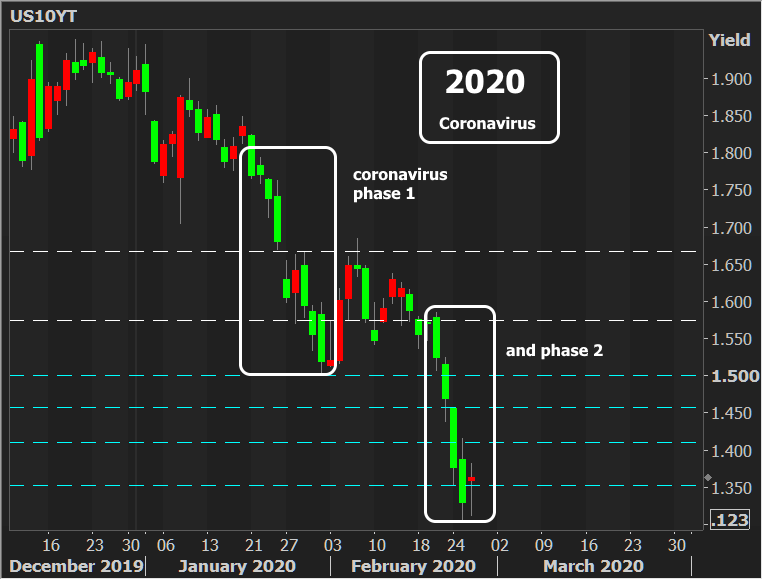 In other words, bonds are still trying to guess just how bad the outcome for the global economy will be.  As I continue to warn, they’re certainly ahead of the game in the sense that they’ve moved to levels that are expected to align with the EVENTUAL global economic reality.  As soon as data and events allow the market to see light at the end of the tunnel, yields will bounce (even as the global economy continues moving through the tunnel).  Such a thing could be hours or days away in the quickest cases.  If coronavirus continues to surprise, we could also be looking at weeks (or maybe months, but probably not without help from something else).  Bottom line, the advice is the same: enjoy what you have and be ready to respond if markets give us a cue about a reversal.  Rest-assured, we’ll be talking about that a lot when it happens.

On a final note and/or a sidenote, as will always be the case with Treasury moves like this, MBS are lagging this week’s big rally significantly and lender rate sheets, in turn, are lagging the MBS move.  This is 100% to-be-expected.  Read more about why that is HERE.

Mortgage Taxes in 2018: What You Need to Know

Since Twitter Won’t Stop Crypto Scammers, These Services Will