A bit of a diversion from the typical “Day Ahead” this morning as I came across an interesting assertion while talking about mortgage rates with some friends…  One of them suggested mortgage rates have more room to move lower if the Fed decides to start reinvesting its first $20bln a month of MBS proceeds again (which it currently allows to “roll off” the balance sheet).  Very smart line of thinking considering this guy probably didn’t have change for a nickel, but I digress.

It would be a big surprise to see the Fed move that direction with respect to mortgage-backed-securities (MBS). They have been clear and consistent in their message regarding a return to a portfolio consisting primarily of Treasury securities. This has been all the more critical given the recent overnight funding (repo market) drama brought about by biggest banks being forced to own too much Treasury debt. The Fed perpetually relieves that funding stress by serving as a the proverbial “buyer of size,” thus providing funding markets with the cash needed to keep the lights on.

None of that is scary or scandalous (as the overnight funding drama was back in, say, 2008). It’s more a byproduct of this presidential administration issuing a crap-load (technical term) of debt and the Fed perhaps being a tad complacent as it continued a halfhearted attempt to shrink its balance sheet.  All that to say, the Fed actively fulfills its financial stability mandate by staying focused on Treasuries because someone has to buy them in order for banks to have cash to lend to one another.

The Fed sent its (probably) final message that the mortgage market needed to hear in 2012 when QE3 specifically targeted mortgages for bond-buying (and not Treasuries). Before that, spreads had drifted back up to levels that suggested investors still hadn’t wrapped their minds around mortgages being safe again after the meltdown. QE3 did the trick there and we haven’t had a serious spread blowout ever since. 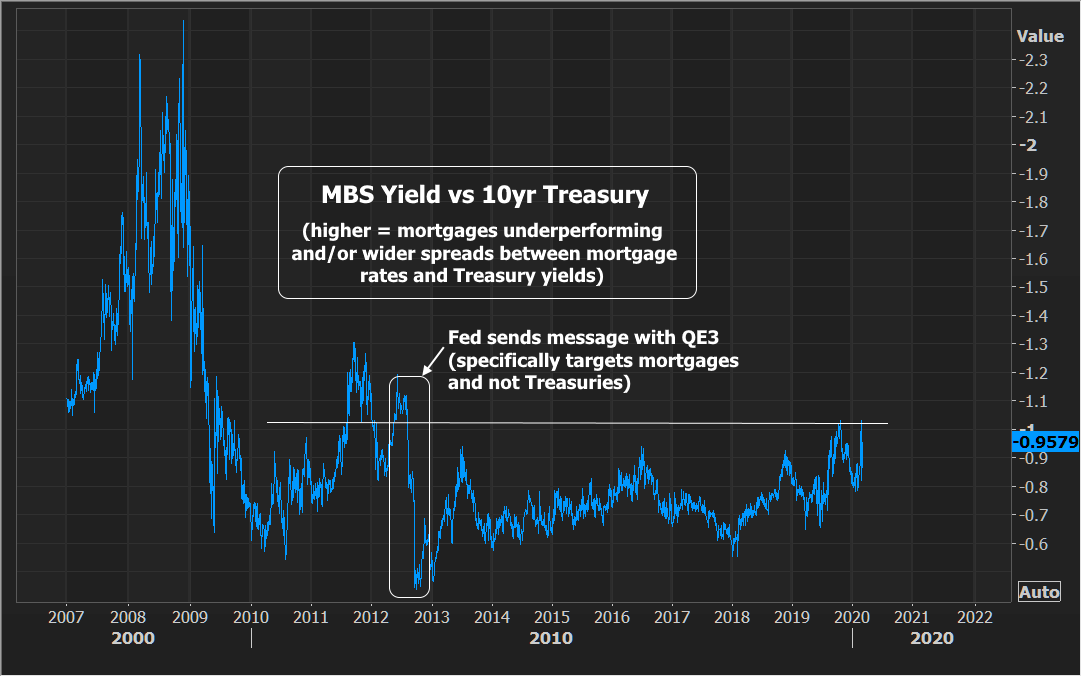 Spreads are currently elevated only because Treasuries have gone on such a ridiculous tear to all-time low yields. Due to the nature of MBS (where a consumer can call the bond due by refinancing if rates fall), they will ALWAYS underperform Treasuries at times when rates are surging ridiculously lower–especially when there has been good origination activity in recent months. It’s a bit of a perfect storm in that regard. Purchases were strong in 2017. They weakened in 2018, but we’re still talking about roughly 5 million homes a year–a vast majority of which are financed. This was all occurring at the highest rates since 2013/2014 and those rates were “in the money” for a refinance by mid-2019 thanks to the trade war. That was the nicest refi boom we’d seen in a while (2012 or 2016, depending how you measure it).

Now 2020 comes along with coronavirus and rates are, of course, well into all-time lows. Now, the scores of borrowers who just refi’d in mid-to-late 2019 are in the money for a refi again! This is bad medicine for MBS spreads vs Treasuries and they will essentially always blow out given similar conditions.

Ask the average mortgage borrower if they care about spreads right now. That would be one of the two reasons the Fed might care about getting back into mortgages (i.e. if costs were high enough to be inhibiting the housing market, but in fact, it’s quite the opposite right now, spreads be damned).

The other reason the Fed might get back into mortgages is if spreads were blowing out for credit quality reasons (or other instances where investors might be scared to buy). This is also clearly not the case right now given the “you burn you learn” message driven home to underwriting standards by the financial crisis. Yes, there are stories about loan programs that hearken back to that bygone era, but any career loan officer that originated in 2004-2007 can tell you there’s simply no comparison to now vs then–not even close. Point being there isn’t any investor trepidation about buying MBS apart from the distaste for a premium-priced bond that runs the risk of being paid off much earlier than expected and thus being much less profitable than expected.

As such, the Fed can rest as comfortably as you can knowing that spreads will return to earth when Treasury yields stabilize or move higher (and especially when the threat of another major surge lower seems to have subsided).  So far today, the overnight trading session suggests such threats can’t be ruled out.  10yr yields are starting the day having fully erased the somewhat dramatic spike that forced us to ask unpleasant questions yesterday afternoon (i.e. “is it over?”).  Maybe not, bond market, maybe not…

MBS should be opening up around a quarter of a point.

Fourth-Quarter Big Bank Earnings: What You Need to Know

4 things you might not know about the new tax law

Feeling Left Out at an Extremely Chummy Workplace

Why can’t I reach a perfect credit score of 850 points?

Impac CEO who kept company alive during the bust to step...

10 facts you must know from mortgage industry’s first major summit...