As America heads into a deep recession, the $11 trillion residential-mortgage market is in crisis. Investors who buy home loans packaged into bonds are dumping even those with federal backing because of panic that millions might not make their payments.

Yet one risky sector had started to show cracks long before the coronavirus pandemic sparked the worst financial meltdown in 12 years: the federal government’s largest affordable-housing program, whose lenient terms are geared toward marginal borrowers.

As real estate prices soared in recent years, working-class adults everywhere have increasingly relied on mortgages backed by the Federal Housing Administration — and U.S. taxpayers. Since 2007, the FHA’s portfolio has tripled in value to more than $1.2 trillion, almost 11% of the market. While private lenders make these loans, they are packaged into Ginnie Mae bonds, common in mutual funds and pensions.

FHA borrowers are likely to struggle even more than other homeowners. Before Covid-19 started roiling China, a November FHA report found that 27% of borrowers last year spent more than half their incomes on debt, a level it describes as “unprecedented.” The share of FHA loans souring in their first six months has doubled over the last three years to almost 1%. Borrowers’ credit scores are growing weaker.

Dave Stevens, FHA commissioner under President Barack Obama and former chief executive officer of the Mortgage Bankers Association, said a recession will expose hidden risks in home lending. “This should be an alarm bell to policy makers,” Stevens said. “Sometimes you get blinded by a good economy and suddenly look at it and see a bubble of defaults coming.”

With its military bases, universities and the headquarters of companies such as insurer USAA, San Antonio is packed with blue-collar workers who have stretched further than most to buy a place to live.

Not long ago, Alex Castillo drove his shiny black Infiniti SUV through an office park north of the San Antonio airport, along a busy seven-mile stretch of highway that loan officers call “Mortgage Row” because of its abundance of small independent mortgage companies that dominate FHA lending. 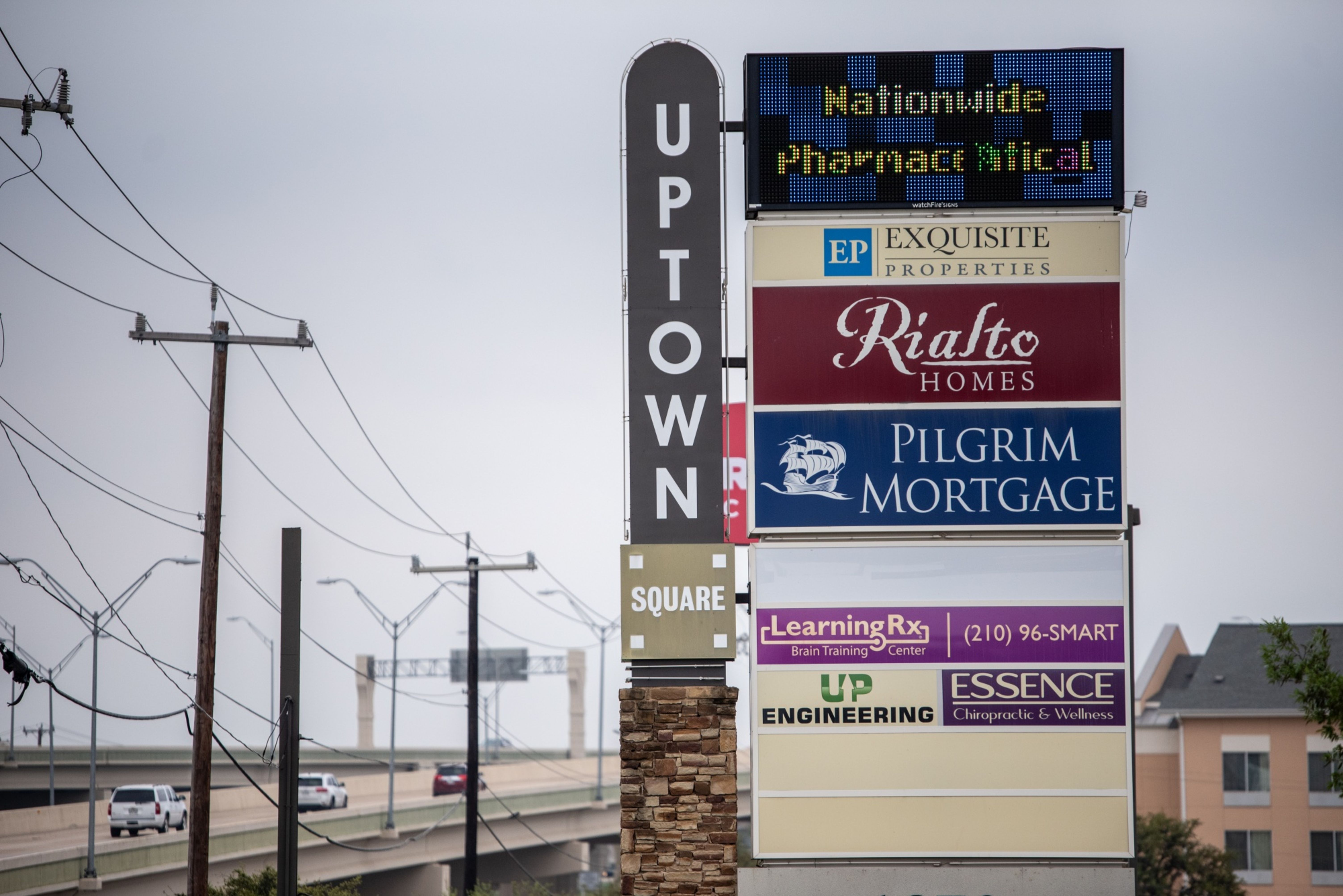 Castillo, who has the words “The Dream Starts Here” stitched into his jacket, works for Pennsylvania-based American Residential Lending. Oddly, amid the pandemic, his business is booming. His customers locked in FHA mortgages after interest rates plunged this month — adding to federally backed mortgage debt.

“If the government tells me you’re good enough to get a loan, I have to trust and believe in the government,” Castillo said. “Then we just hope and pray that the client doesn’t get foreclosed on.”

In downtown San Antonio, scores of investors, some wearing cowboy boots and straw hats, stood on a parched lawn beside the city’s historic granite-and-red-sandstone courthouse. It was the first Tuesday of February, the day of the foreclosure auction.

Matt Badders, a San Antonio lawyer who represents lenders, auctioned off two houses. The failed mortgages remind him of the run-up to the financial crisis 12 years ago, when lending to customers with spotty credit nearly brought down the world’s financial system. “We’re almost back to 2007, when mortgage originators are waking people up on park benches, saying sign here,” Badders said.

At the auction, the crowd bid on 338 homes, a third with FHA mortgages, according to Roddy’s Foreclosure Listing Service. One house had dual master bedrooms, a game room and granite kitchen counters. It sold for $202,000 — $52,000 less than the homeowner borrowed only two years ago. The taxpayer-backed FHA insurance fund will take a loss.

A few neighborhoods away, Daniel Lieber stood in the door of his yellow split-level house with a Texas star to the left of the front door. He bought it for $153,000 three years ago, with a mortgage from PrimeLending, a nationwide mortgage subsidiary of Hilltop Holdings Inc.

Lieber soon fell behind on his payments after his wife got cancer, he lost a job and landed a new one at International Paper Co. that paid half as much. In January, PrimeLending moved to foreclose. Lieber filed for bankruptcy so he can stay in the house. “As long as we make the payments, we should be fine,” he said.

Hilltop spokesman Ben Brooks said the company doesn’t discuss borrowers but is working with them during the crisis. “We understand that with the current evolving situation, our customers may experience financial hardship,” he said in an email.

The government has long sought to keep its portfolio’s risk to a minimum. One way it has done so is by joining with mortgage company insiders who identify fraud and recover money from taxpayers. The Trump administration wants to curb these so-called whistleblower suits because their steep penalties have scared big banks away from FHA loans.

For example, the federal government has decided it doesn’t want to pursue — and has asked a judge to dismiss — a lawsuit against Utah-based Academy Mortgage Corp. The judge refused. The suit claims the company’s staff would repeatedly feed information into an automated federal underwriting system, manipulating it until the computer gave the green light. “Decline is a curse word,” plaintiff Gwen Thrower, a former underwriter, quoted a manager as saying. “We don’t use it.”

In court papers, Academy Mortgage denied wrongdoing. The FHA, which didn’t respond to requests for comment, has said it no longer uses the automatic system for the riskiest loans.

Some failures are inevitable at the FHA because of its mission of helping marginal borrowers. To offset the risk, homeowners pay fees toward a government-backed fund that insures against defaults. Last year, loans 30 days or more past due amounted to 8% of the portfolio, still below the peak of 14% in 2009.

After the last financial crisis, the fund required a $1.7 billion taxpayer bailout, its first in 80 years. The government has since tightened lending standards and built up the insurance fund. Because of rising home prices, borrowers who bought years ago now have considerable home equity, which could provide some cushion as well.

But recent loans are the most likely to fail. In San Antonio, Erika Wilson, a 32-year-old home health aide who was separated from her husband, bought her dream house in June 2018. It had an eat-in kitchen and more than enough room for her two young daughters. Along with her other debt, the $1,900-a-month mortgage payments ate up more than half her family’s income.

On Q Financial, an Arizona-based lender, foreclosed on her loan. She’s still living there because the federal government has suspended eviction proceedings in its lending programs during the pandemic. “I messed it up,” Wilson said. “I didn’t know what I was doing. It made me feel like I wasn’t adult enough to own a home.”

Shirley Boynton, On Q senior vice president for compliance, said the loan failed so quickly because Wilson falsely said she was still employed when she had already lost her job before she bought the home. Wilson denied any misrepresentation. She said she moved into the house before she lost her job, and she believed a lender wouldn’t have approved a loan she couldn’t afford.

Boynton acknowledged the risk of a mortgage like Wilson’s. Among the red flags, Wilson had lousy credit, borrowed the down payment from her grandfather and included income from her husband, who wasn’t living with her. Boynton points a finger at the government, saying the company is merely following rules that allow such borrowing. Now, she said, the FHA should consider changing its approach to reflect “a little more caution.”

India is Exploring a Central Bank Digital Currency for Payments

Top talent should be seeking you out