The Department of Housing and Urban Development’s 60-day foreclosure halt for Federal Housing Administration borrowers is too short to help reverse mortgage borrowers, a letter from consumer groups stated.

“HUD’s 60-day foreclosure moratorium was a crucial first step, but does anyone really believe older homeowners will have recovered from this crisis within 60 days?” said National Consumer Law Center attorney Sarah Mancini in a press release. “Further action is needed to ensure that this older population, which is most vulnerable to the virus, will maintain stable housing and not end up facing unnecessary foreclosures.” 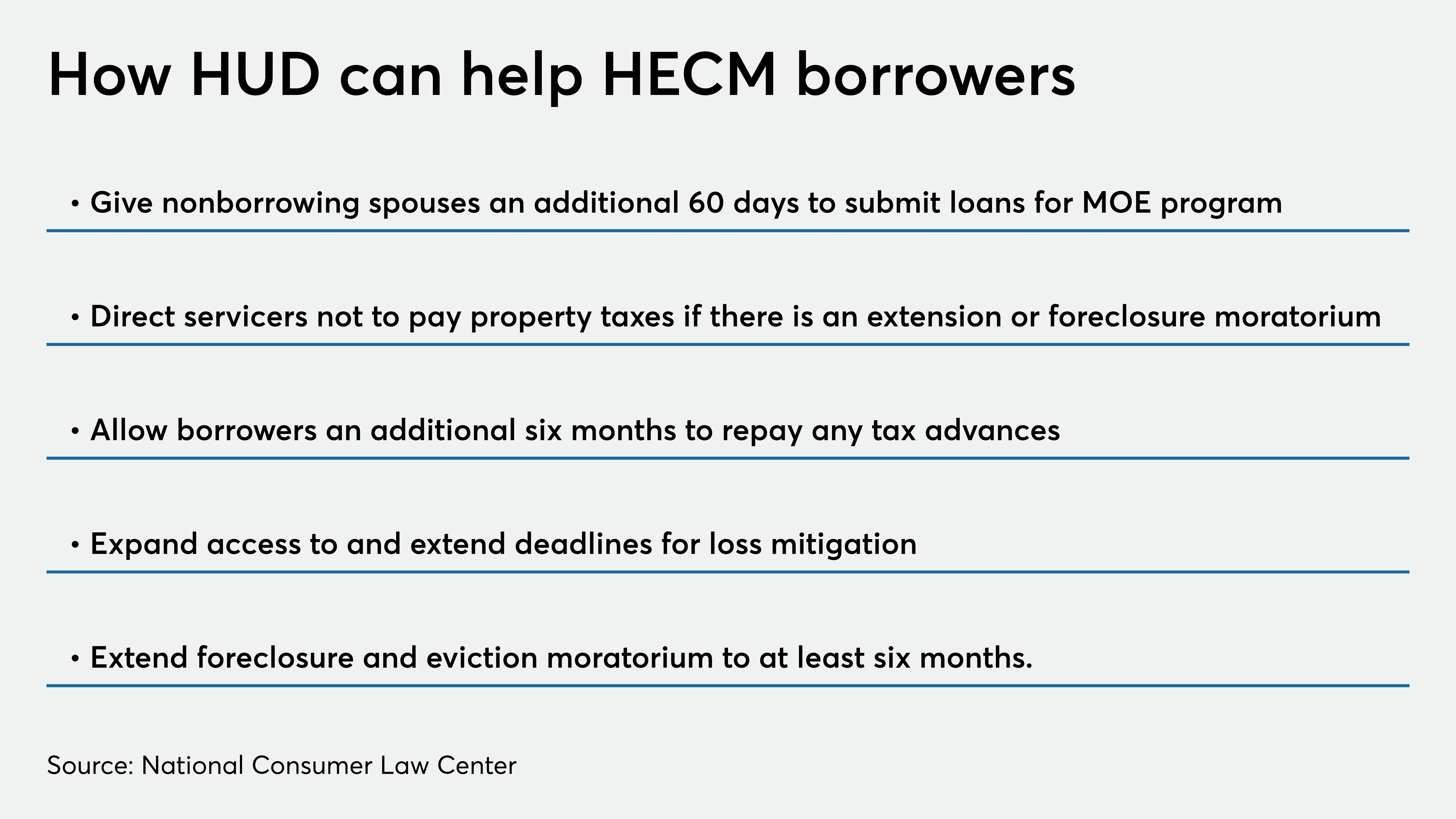 New challenges for Home Equity Conversion Mortgage borrowers from the fallout from COVID-19 include defaults on property charges, defaults on existing repayment plans and the inability to obtain legal assistance and/or appear in court.

“We know that the aftermath of this crisis will extend well beyond 60 days, especially the financial consequences,” a coalition of over 40 groups said in a letter sent to HUD Acting Deputy Secretary Brian Montgomery. “As a result, we urge HUD to extend the moratorium to six months and to consider extending further as needed. We hope this timeframe will give borrowers and mortgagors the time they need to address the payment issues that will arise.”

HUD also needs to clarify if the latest mortgagee letter extends the timeline for nonborrowing spouses to submit their loan to the Mortgagee Optional Election program by 60 days, the coalition said. Under the 2019 mortgagee letter that established the MOE, the deadline was supposed to be March 21.

“Depending how long the public health emergency lasts, a further extension [of the MOE deadline] may be necessary,” the coalition’s letter said.

The groups, led by the NCLC, also ask HUD to direct servicers not to pay property taxes on behalf of reverse mortgage borrowers if the taxing authority has an extension or foreclosure moratorium. If an advance was made, allow an extra six months for borrowers to pay back the funds.

Plus, the agency must expand access to loss mitigation for qualified homeowners and allow for new repayment plans when borrowers default during the national emergency, the groups said.

After soaring for years, Buffalo’s housing market grounds to a halt

How Did Nick Leeson Contribute To The Fall of Barings Bank?

Choosing Cryptocurrency Exchanges | What to Look for in an Exchange

Some Reaction to NFP, But Just as Much to Harker and...