Title underwriters won’t be hit as hard by the coronavirus as other insurers, but related economic changes will challenge them, Fitch Ratings said, in assigning a negative outlook to the sector.

The probability of “reduced volume of real estate and mortgage financing transactions coupled with a recessionary environment, could significantly dampen premium revenues in the second half of 2020 and full-year 2021,” a Fitch press release said. “While deteriorating macroeconomic conditions is expected to impact the industry as a whole, the effect is expected to be concentrated outside of Fitch’s rating universe at smaller regional underwriters that lack scale and geographic diversity.” 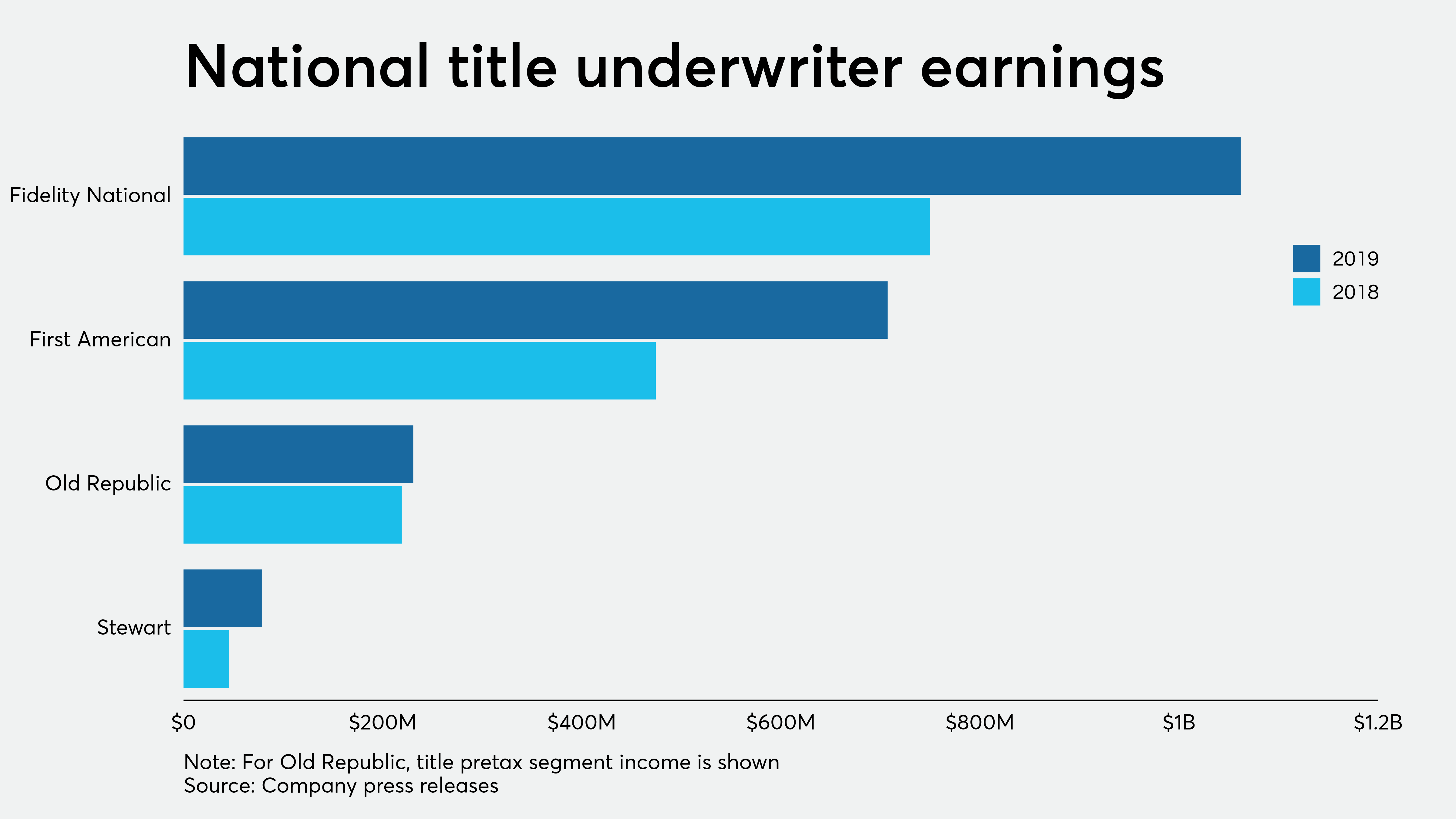 There are four national, publicly traded title insurance underwriters; all reported improved year-over-year profits for 2019. The remainder, whose combined market share is 16%, are for the most part privately held. In comparison, Fidelity National has 34% of the market, First American is at 25%, Old Republic holds 15% and Stewart has 10%, according to the American Land Title Association.

On the positive side, those publicly traded underwriters “reported very strong earnings over the past several years, and January and February of 2020 are also expected to produce very strong earnings based on elevated refinance volumes,” Fitch said. “Economic effects from the ongoing coronavirus epidemic are likely to have a modest negative impact on near-term operating performance, but title insurers’ vulnerability will offset by stable claims experience, robust capital buffers, and the ability to aggressively manage expenses.”

That last point could be the key differentiator between the various underwriters and possible survival.

Title insurers were hard hit during the financial crisis, with one large company, LandAmerica, forced to file for bankruptcy protection in November 2008. As part of the filing, Fidelity acquired LandAmerica’s underwriting units.

Things are much different now.

“Fitch believes that title underwriters are currently in a better position to manage through an adverse shift in revenue trends, given current staffing levels and advances in operating efficiencies from technology and information systems investments,” the press release said.

Another ratings agency, Demotech, said in its own press release that industry participants “are financially healthy and possess the means to address time gaps in title insurance coverage associated with the closing or limited hours of county recorder offices from coast to coast, Alaska and Hawaii.”

Title insurers have procedures and practices to mitigate purchaser and lender exposure associated with unknown matters emerging in the period subsequent to the property records search, Demotech noted.

“Gaps in protection are unavoidable,” Joseph Petrelli, Demotech’s president, said in a press release. “Backlogs at recorder offices and intervening matters subsequent to a search include the time commitment to process, record or index information.”

An ever changing list of county recorder office partial or full closures has impacted property recording activity. Reportedly, some underwriters are not issuing policies if the transaction cannot be recorded, either physically or electronically.

There is a temporary form of coverage as an alternative at the transaction level, gap insurance.

“Gap insurance practices vary by state, size of transaction, and the parties involved. Given that the professionals focused on finding and addressing matters impacting title to real property may be unable to discover all matters of record, there may be an additional premium associated with gap coverage,” said Douglas Powell, senior financial analyst at Demotech.

Retailers that Accept Bitcoin | Where to Shop with Bitcoin(BTC)?