Nonbank mortgage payrolls leveled off in February as coronavirus concerns and social distancing measures intensified, but anecdotal reports of selective hiring persisted through March amid a broader drop in U.S. jobs.

An estimated 306,200 employees were on nondepository mortgage broker and banker payrolls in February, according to the Bureau of Labor Statistics. That number matched January’s upwardly-revised figure and represented an increase from 291,200 during February a year ago. 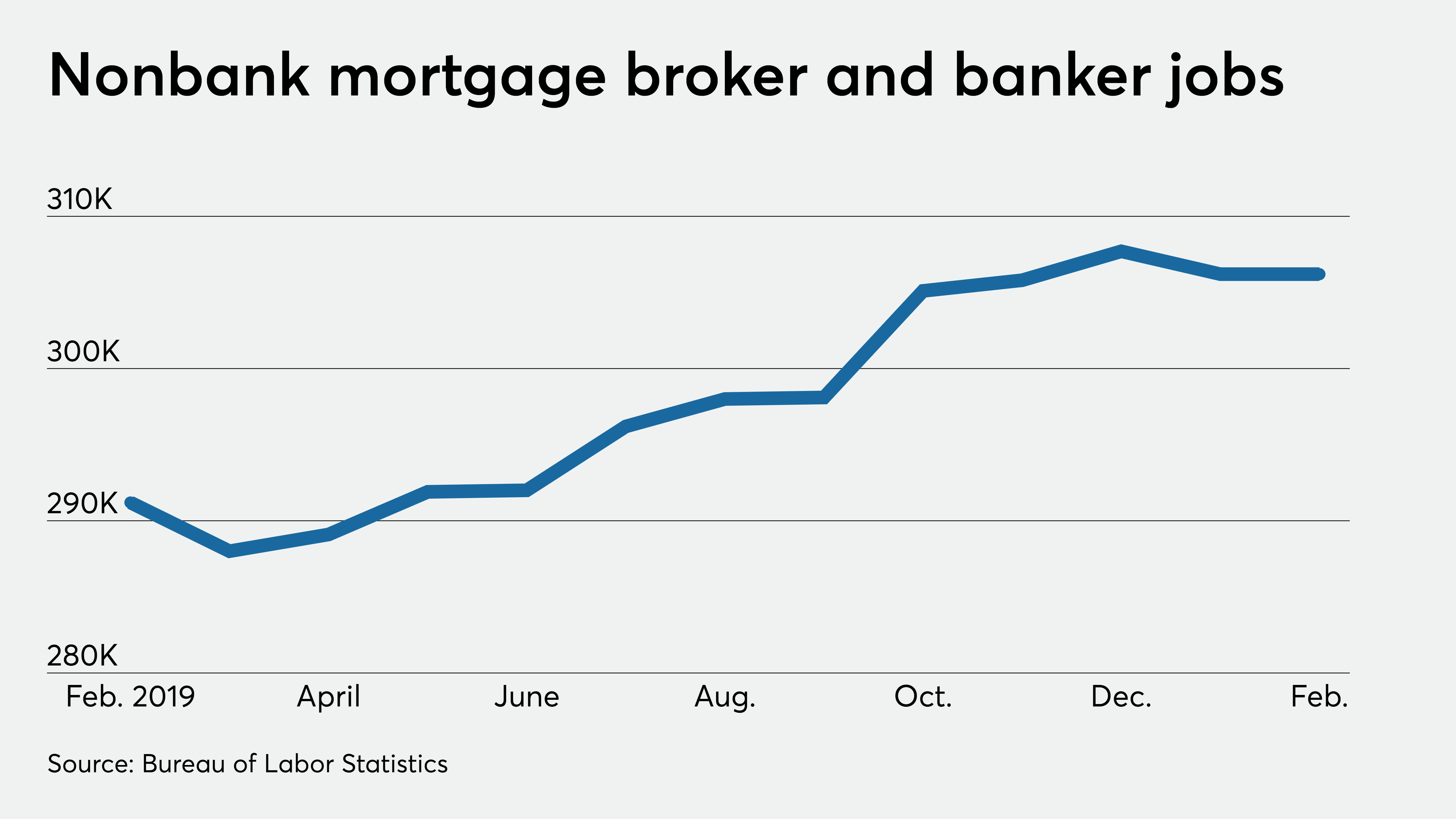 But total nonfarm payrolls in the United States — which are tracked with less of a lag than nonbank mortgage-specific estimates — fell by 701,000 in March, driven primarily by a 459,000 decline in leisure and hospitality jobs. Previously, payrolls trended upward, BLS data showed. In addition, unemployment rose to 4.4% from 3.5% last month.

Overall job numbers have likely fallen even further since then.

“This report likely fails to capture the true extent of the recent decline in economic activity. For example, most of the layoffs associated with the recent surge in unemployment insurance claims likely occurred after the reference period and are not yet reflected in the data. Instead, these more recent UI applicants will appear in the April jobs report, to be released early next month,” Doug Duncan, chief economist at Fannie Mae, said in an email.

“We will also likely see an additional decline to labor force participation, as the lack of job prospects compels many workers to stop searching for new employment and instead be classified as a ‘discouraged worker,’ a group that numbered over a half-million persons this month. Overall, this report was quite negative, but it is only a partial accounting of the job losses and economic pain associated with the ongoing crisis.”

Nevertheless, some mortgage lenders have continued to hire in order to support their efforts to remotely process an influx of refinance requests from consumers during periods when rates have fallen. Better.com, for example, is recruiting laid-off hospitality workers to help fill customer-service jobs.

“We do expect continued strong demand for refinance loans over the next several months, given the record low level of mortgage rates,” Michael Fratantoni, chief economist at the Mortgage Bankers Association, said in an email.

At the same time, some nonbank mortgage operations are facing financial strain related to the coronavirus, particularly if they have large exposures to servicing or products that lack government-related support. Nonbanks are considered more vulnerable than banks because they tend to lack balance sheets with cash resources to help meet unexpected obligations during periods of distress.

There is some hope nonbank servicers could receive governmental intervention that would help them advance funds to cover forbearance requests related to the coronavirus, reducing the strain on their operations. In addition, there is hope that a recently passed stimulus bill will help offset some of the strain on consumers’ employment and income.

“Disaster relief is the focus right now, and how well we implement it as a country is going to be material to the outcome of both the overall economy and the housing market,” Ruben Gonzalez, chief economist at Keller Williams, said in an email.

This chart shows the fundamental reason why stocks are back near...

Buyer’s remorse: what millennials regret about their mortgage