Black Knight predicts that the nation’s mortgage delinquency rate will be higher than the levels seen during the Great Recession, as coronavirus-related unemployment batters borrowers.

Researchers looked to mortgage-related data from the Great Recession and natural disasters in an attempt to gauge what might happen in the next few months.

For example, at the end of 2009, the unemployment rate was 10%; based on the most recent statistics of new filings, the current rate is about 9.5%. 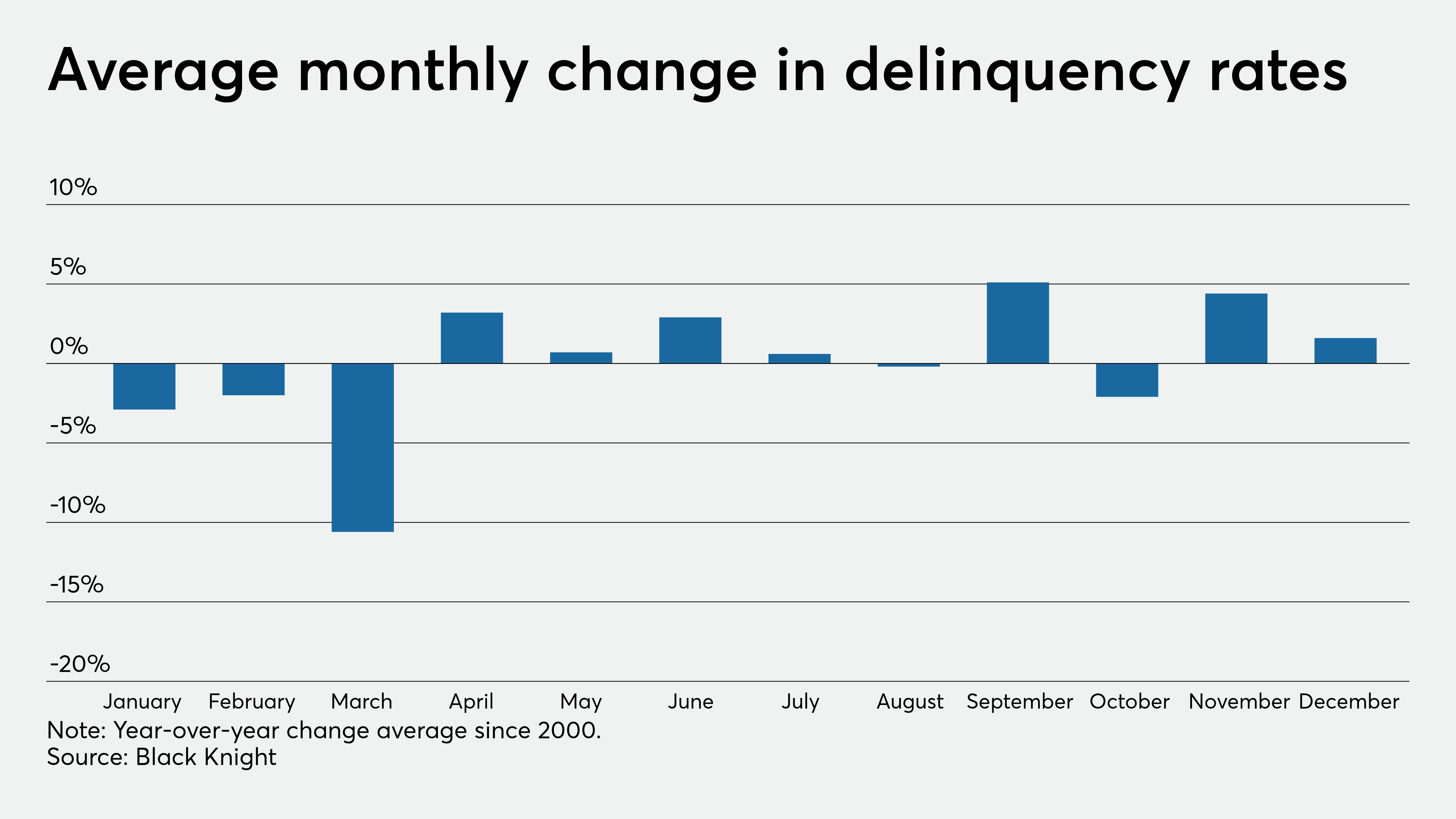 Extrapolating that with what happened during the Great Recession, at an unemployment rate of 10%, expectations are for 2 million new mortgage delinquencies. With the existing number of mortgages with late payments, it would bring the total at 4 million delinquencies with a national noncurrent rate of 7.5%, Ben Graboske, Black Knight’s president, data and analytics, said in a Monday press release accompanying its monthly Mortgage Monitor report.

“If unemployment climbs to the 15% recently projected by Goldman Sachs, we could be looking at 5.5 million past-due mortgages,” he said. “Should unemployment reach the 32% projected by the Federal Reserve Bank of St. Louis, the noncurrent rate could spike to nearly 19%, surpassing what we saw during the Great Recession, with 10 million homeowners past due on their mortgages.”

But natural disaster forbearance programs that have in the past helped those who had a temporary job loss stay in their homes could partially offset the rise in delinquencies if implemented here.

“Pointing to the effectiveness of forbearance programs in a time of crisis, of the more than 140,000 seriously delinquent mortgages caused by the 2017 hurricane season, just 1% of homes were lost to foreclosure or short sale two years after the storms,” Graboske said. “Although, should financial disruptions become more long-term, additional assistance programs may become necessary. Of course, a surge of forbearance requests brings its own challenges, both operational and financial.”

However, mortgage servicers are already dealing with a surge of forbearance requests following the passage of the CARES Act, with those lacking the proper technology or staffing levels being hard-pressed to manage the situation.

And then there are the principal and interest payment advances that need to be made. As Black Knight previously pointed out, the combined toll for conforming and government-guaranteed mortgages ranges from $2.1 billion at a 5% forbearance rate to $8.5 billion at a 20% rate.

Black Knight’s most recent delinquency data is for February, before the coronavirus hit, when the rate rose nearly 2% from January to 3.28%; but it was down 18% on a year-over-year basis.

There were 32,200 foreclosure starts in February, the fewest since Black Knight started tracking this data in 2000. The month’s national foreclosure rate of 0.45% was the lowest since 2005.

Typically March is the month with the lowest amount of mortgage delinquencies, because distressed borrowers are able to tap tax refunds to catch up on payments.

Even if there is a fraction of March’s usual performance improvement, delinquencies could hit a new record low in the month before the full onset of COVID-19 begins to push delinquency rates up in following months, the report found.