Writedowns of mortgage servicing rights in Wells Fargo’s and JPMorgan Chase’s earnings — which differ notably from other estimates in their reports — point to another complication taking shape in a market roiled by the COVID-19 outbreak.

Determining valuations for MSRs is getting trickier now that the pandemic-related volatility has discouraged routine trading and complicated the outlook for loan performance and costs.

“People are asking, ‘How do I value this stuff in a distressed market?'” said Mike Peretz, head of the housing finance practice at consultancy Capco. He noted that this is a new version of a concern that arose during the Great Recession. 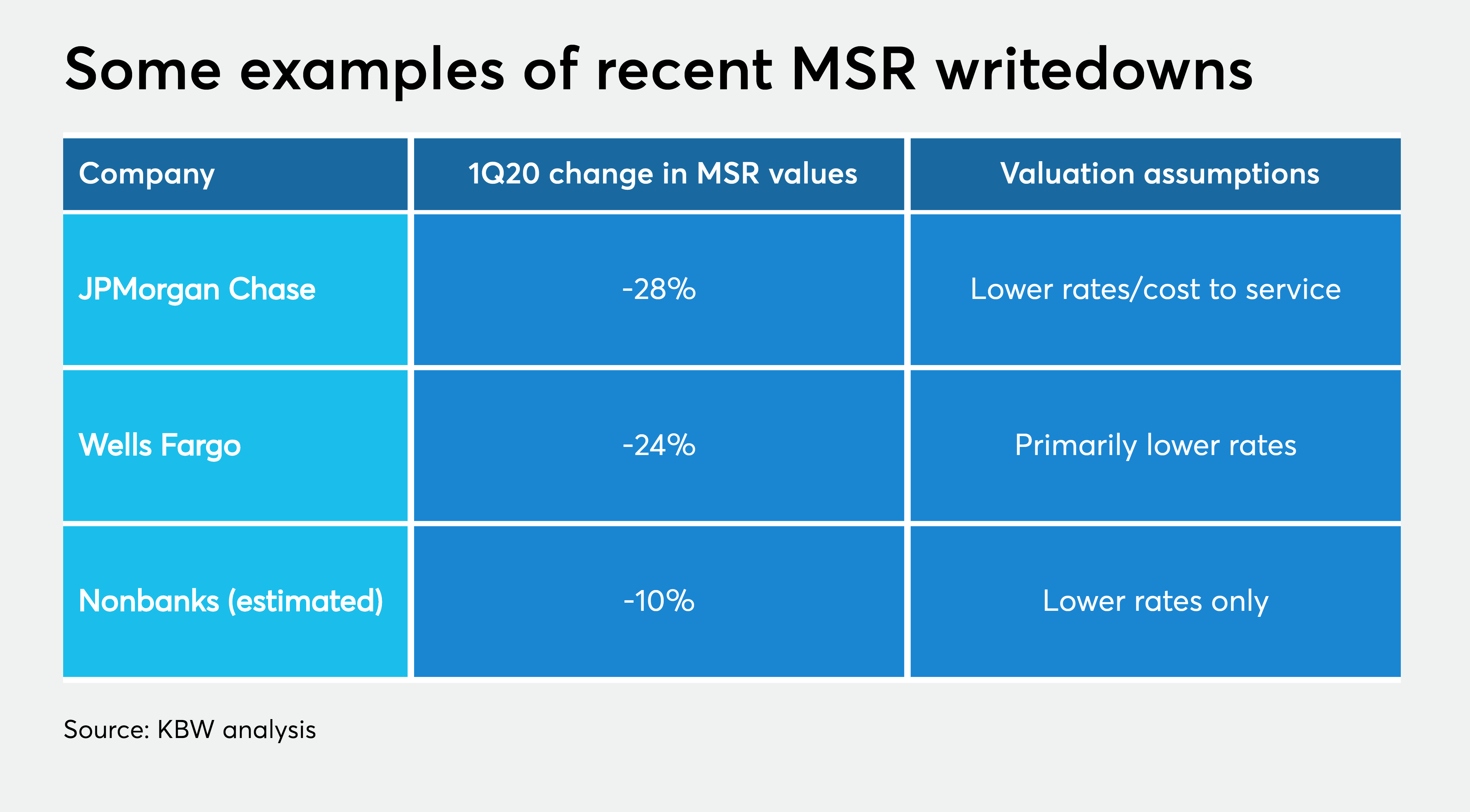 Accounting rule FAS FSP 157-4 does allow the use of other avenues to determine fair market value in this circumstance, but the economic-value approaches allowed can produce varying results, said Mike Carnes, managing director in the Mortgage Industry Advisory Corp.’s capital markets group.

“I can confidently tell you there will be wider-than-normal differences,” he said.

Already there have been some anecdotal discrepancies related to how much MSRs are being written down, which appear to be partially driven by the varying approaches.

Wells Fargo recorded a 24% quarter-to-quarter decline in mortgage servicing rights valuations and JPMorgan Chase reported a 28% writedown during the same period, but nonbank estimates have been far lower, according to a report by Keefe, Bruyette and Woods.

“Wells Fargo breaks out the components of the MSR mark and most of the decline was driven by lower interest rates. JPM does not break out the components and it is possible that their negative MSR mark was also partially driven by an increase in the assumed cost to service,” Bose George, Thomas McJoynt-Griffith and Eric Hagen, analysts at KBW, said in the report. “Preliminary results from several large, nonbank servicers had pointed to a roughly 10% contraction in MSR values, but we think those estimated marks just reflected lower rates and not a higher cost to service assumption.”

Compounding the MSR valuation challenge is the fact that valuations of servicing hedges set before the coronavirus spread also are subject to volatility, said Steve Harris, president of MIAC’s capital markets group.

“It’s a brutal exercise to have lower MSR values and also lose value on your hedges,” he said.

However, new models have been created for servicing values and hedging strategies that account for COVID-19 and its impact. MIAC, for example, recommends an MSR valuation model it created based on revised forecasts for home prices, prepayments, forbearance and unemployment.

While the general outlook for home prices and prepayments is negative in the short-term, MIAC suggests forbearance could be preferable to delinquency and prepayments could fall as underwriting tightens.

“There is no silver bullet, but I like to look at the glass as half full,” said Carnes.

While forbearances are being modeled by some as having the same impact as delinquencies, servicing experts have generally found that loss mitigation that keeps the lines of communication open with borrowers tends to improve future loan performance.

A recent natural disaster in the anomalous Puerto Rican market, while not directly comparable, does show how there can be an upside to forbearance. A 40% forbearance rate in affected areas was followed by reperformance on the part of half of those borrowers down the road, Carnes noted.

Although the COVID-19 market could have a different dynamic, Puerto Rico also could be instructive in modeling what handling a large volume of forbearance may be like. Due to forbearance volumes outpacing capacity, it did take longer to get borrowers’ payments back on track there, but technology advances since the Great Recession ensured it happened more quickly than it did during that past crisis, Carnes said.

It’s likely that a second wave of modifications or other loss mitigation strategies will be needed to get loans to reperform. That also could lead to changes in MSR valuations. Whether the market seeks standardization of those valuations — and how effective that standardization is — may determine how quickly a recovery could occur, said Carnes.

Marvel’s ‘Black Panther’ Is More Than a Movie, It’s a Model...

What Stock Lever? Bonds Tanking Without Any Help

Weekly mortgage applications are stuck in a rut as rates rise

What are some examples of the main types of capital expenditures...