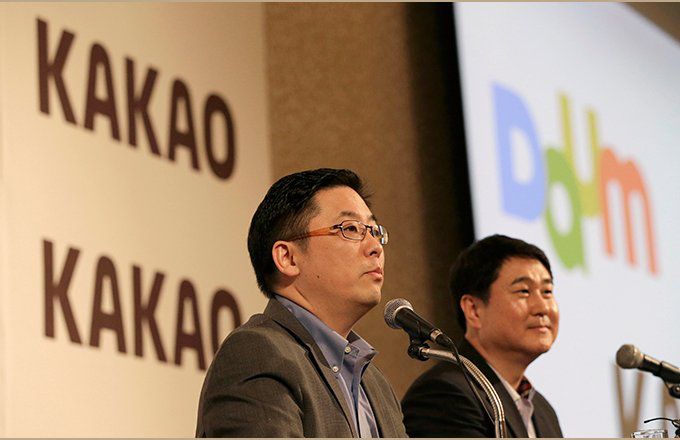 KakaoTalk is a popular messaging application that is used by many South Korean smartphone users. In 2014, KakaoTalk made headlines when it merged with Daum, Korea’s second-largest web portal. The new entity, named “Daum Kakao,” generated some $200 million a year in revenues.

However, Kakao is not without its rivals. Across the strait of Korea, the Japanese mobile messaging market is dominated by Line (an app founded by Naver, South Korea’s largest search engine). While in the East, the Chinese arena is dominated by WeChat, an application with nearly a billion active monthly users.

Despite these possible contenders to its market share in Korea, KakaoTalk has been incredibly successful in monetizing itself through advertising, games, stickers, and various other ambitious enterprises.

According to official Daum Kakao investor presentations, much of the company’s revenues come from advertising. Mobile advertising in Korea has grown nicely over the years. In 2013, Kakao partnered with IGAWorks a mobile ad marketing company, to bring the ad platform adPOPcorn to KakaoTalk.

adPOPcorn will allow Kakao users (especially gamers) to earn incentives, such as in-game items, for click on ads. Kakao also makes advertising revenues through its KakaoStory, a “photo-centric SNS (social networking site), which allows sharing of photos videos and thoughts,” according to the company. Key features include photo editing, blogging, hashtags, and a news feed where ads can be displayed.

Launched in 2012, Kakao’s game publishing service has been an explosive driver of earnings growth. Despite its simple messaging origins, Kakao’s massive platform enabled developers to publish and distribute games to its millions of users, according to Statista.

The first game to become a run-away hit was developed by Match 4 and is considered to be the “Candy Crush Saga of Korea.” The game, known as “Anipang,” emulates its western counterpart not just in terms of game mechanics, but also its freemium-based model, generating hundreds of thousands of dollars in revenues a day.

Anipang’s success fueled an influx of titles on to the Kakao platform (and the Kakao coffers). Kakao generated over $100 million in gaming revenue last quarter.

For those looking to simply take their messaging to the next level, Kakao also sells stickers and emojis available for purchase through Kakao’s own virtual currency, Chocos.

Stickers are incredibly lucrative in the world of messaging applications, as demonstrated by Kakao’s rival Line, whose sticker sales are responsible for 20 percent of its net sales, according to the company. While Kakao is not as reliant on sticker sales as the Japanese app maker, stickers, which are categorized with Kakao Music, Kakao Page, and Kakao payment services under the “Other” category.

Shopping, Music, and Others

Just like Line and WeChat, Kakao also offers its own e-commerce market place through Kakao Gift Shop and KakaoStyle. The former allows users to deliver gift coupons to one another through KakaoTalk, with offerings ranging from food and beverages to cosmetics and household items. The latter, which is the number one style app in Korea and features 100,000 browseable items and 160+ brands, allows users to share style opinions and information amongst friends while shopping.

Sharing coupons and shopping ideas are not the only things available on Kakao. The app launched its own version of Spotify in 2013. KakaoMusic enables users to create and share their own music room with their friends. Users can leave messages and comments and share sentiments and memories of each other’s rooms. For the entrepreneur, Kakao has also created KakaoPages, a fee-based mobile-optimized platform that gives users the opportunity to sell and market their original content in the form of text, images, audio, or video.

Then there is also BankWalletKakao, developed in partnership with the Korean Financial Telecommunications and Clearings Institute, as well as 16 Korean banks. This service facilitates bank transfers and allows users to make online payments using ATM cards. BankWallet is the second payment service application that Kakao has developed, the first being Kakao Pay (in 2014), which allows Kakao users to pay for e-commerce products and services through KakaoTalk.

Kakao, like Line and WeChat, aspires to be more than a mere messaging app. Based on its business developments, it appears Kakao has successfully introduced many monetizing platforms to generate tremendous revenue growth through its 48 million monthly active users. With its recent acquisition of the American app, Path, Kakao may be planning on expanding further outside of Korea (as Path enjoys immense popularity in Indonesia) and increasing its already impressive lineup of revenue-generating enterprises.

Video: How to set up your mobile wallet

After learning Python last year, I’ve been building a way to...

Bitcoin Cash’s First Anniversary — Where Are We Now?

Decentralized Market Exchanges (Dex) – Why Should You Care

Chipmaker Intel is heading back toward highs: Trader

Designating a Trust as a Retirement Beneficiary