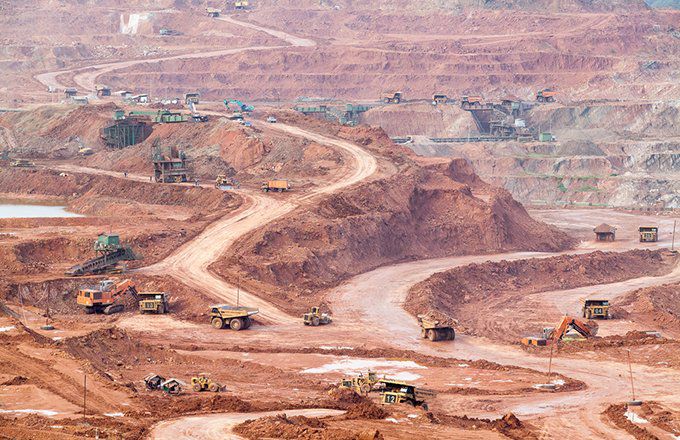 The mining industry is one of the oldest established industrial operations. Mining has been critical to the development of major countries, such as the U.S., Canada, and Australia. The entire western hemisphere, both North and South America, is rich in a wide variety of mining deposits.

Russia is by far the leading country for mining enterprises in Europe. Africa is rich in mineral deposits, notably gold and diamonds, and several of the major mining companies have had mining operations established there for decades. Australia is a notable source of gold and aluminum.

China is the world’s richest source of rare earth minerals, containing an estimated 90% of these minerals that are important elements in the manufacture of automobiles and many other products.

The U.S. was at one time the world’s leader in the production of many major mining products, but increasing environmental regulations have curtailed much of the U.S. mining industry.

The mining industry is subdivided into categories based on the principal mining interest. The three main subdivisions of the industry are precious metals and gemstones mining, industrial and base metal mining, and nonmetal mining, which includes mining for such important commodities as coal.

The industry is further divided into major mining companies, such as Rio Tinto Group (RIO) and BHP Billiton Limited (BHP), and “junior miners.” Junior miners are typically much smaller companies primarily engaged in the business of exploration or discovering new mining deposits.

Mining requires extensive capital expenditures, both for exploration and the initial establishment of mining operations. However, once a mine is operational, its operating costs tend to be significantly lower and relatively stable.

Since mining revenues are subject to fluctuations in commodity prices, it is important for mine operators to wisely manage changes in production levels.

The quick ratio is a basic metric of liquidity and financial solvency. The ratio measures a company’s ability to handle its current short-term financial obligations with liquid assets—cash or assets that can quickly be converted into cash.

The quick ratio is calculated by dividing the total current assets minus inventory by the company’s total short-term obligations. This ratio is often referred to as the “acid test ratio” because it is considered such a strong fundamental indicator of a company’s basic financial health or soundness.

The quick ratio is important for evaluating mining companies because of the substantial capital expenditures and financing necessary for mining operations. Analysts and creditors prefer to see quick ratio values higher than 1, the minimum acceptable value.

The operating profit margin is a primary profitability ratio examined by analysts to gauge how effectively a company manages costs. This is important in the mining industry since mining companies frequently have to adjust production levels, significantly changing their total operational costs.

Return-on-equity (ROE) is a key financial indicator considered by investors because it indicates the level of profit a company can generate from equity and return to stockholders.

Average ROEs in the mining industry range between 5% and 9%, with the best-performing companies producing ROEs closer to 15% or more. The ratio is calculated by dividing net income by stockholders’ equity.

The Differences Between the Installment Method and Percentage of Completion Method

Investors should be more worried when the yield curve steepens again