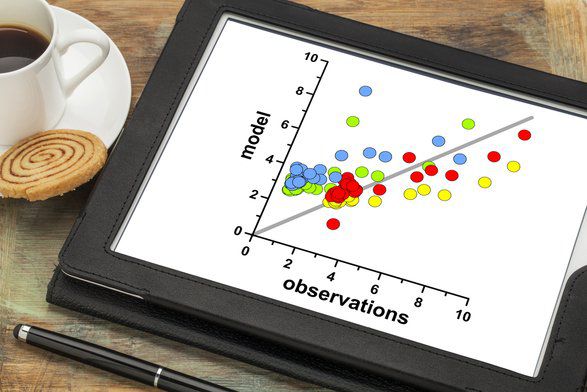 Correlation among variables does not (necessarily) imply causation.

In the financial markets, correlation coefficient is used to measure the correlation between two securities.

The closer the value of ρ is to +1, the stronger the linear relationship. For example, suppose the value of oil prices are directly related to the prices of airplane tickets, with a correlation coefficient of +0.95. The relationship between oil prices and airfares has a very strong positive correlation since the value is close to +1. So if the price of oil decreases, airfares decrease and if the price of oil increases, so do the prices of airplane tickets.

Understanding the correlation between two stocks or a stock and its industry can help investors gauge how the stock is trading relative to its peers. All types of securities, including bonds, sectors and ETFs can be compared with the correlation coefficient.

A negative (inverse) correlation occurs when the correlation coefficient is less than 0 and indicates that both variables move in the opposite direction. In short, any reading between 0 and -1 means that the two securities move in opposite directions. When ρ is -1, the relationship is said to be perfectly negative correlated. In short, if one variable increases, the other variable decreases with the same magnitude, and vice versa. However, the degree to which two securities are negatively correlated might vary over time and are almost never exactly correlated all the time.

When it comes to investing, negative correlation doesn’t necessarily mean that the securities should be avoided. The correlation coefficient can help investors diversify their portfolio by including a mix of investments that have a negative or low correlation to the stock market. In short, when reducing volatility risk in a portfolio, sometimes opposites do attract.

As an example, assume you have a $100,000 balanced portfolio that is invested 60% in stocks and 40% in bonds. In a year of strong economic performance, the stock component of your portfolio might generate a return of 12%, while the bond component may return -2% because interest rates are rising which means that bond prices are falling. Thus, the overall return on your portfolio would be 6.4% ((12% x 0.6) + (-2% x 0.4). The following year, as the economy slows markedly and interest rates are lowered, your stock portfolio might generate -5% while your bond portfolio may return 8%, giving you an overall portfolio return of 0.2%.

What if, instead of a balanced portfolio, your portfolio was 100% equities? Using the same return assumptions, your all-equity portfolio would have a return of 12% in the first year and -5% in the second year, which are more volatile than the balanced portfolio’s returns of 6.4% and 0.2%.

The correlation coefficient can be helpful in determining the relationship between your investment and the overall market or other securities. This type of statistic is useful in many ways in finance. For example, it can be helpful in determining how well a mutual fund is behaving compared to its benchmark index, or it can be used to determine how a mutual fund behaves in relation to another fund or asset class. By adding a low or negatively correlated mutual fund to an existing portfolio, diversification benefits are gained.

Learn About the BCH Network With Bitcoin.com’s ‘Mastering Bitcoin Cash’

Bonds Battle Back to Unchanged in Narrow Range

Goldman analysts are underwhelmed by the new Goldman Sachs-Apple card